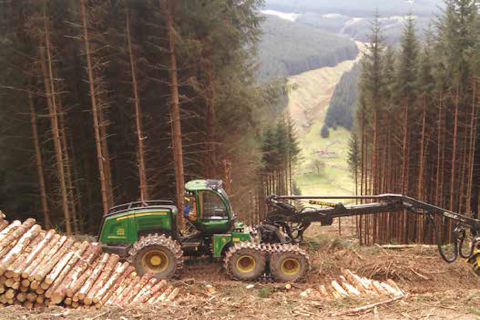 Scotland’s next phase of timber by rail

After successful trials last year involving moving timber trains in Scotland for the first time in over a decade, a new scheme is at the planning stage for similar operations next year. The new proposals will also see raw timber traffic moved from plantations in Caithness (the far north of mainland Scotland) to processing facilities near Inverness and possibly elsewhere in the UK. It has already been claimed that the three weekly trains will eliminate 400 heavy truck movements every week.

Edinburgh-registered Caledonian Land and Forest Investments, a holding company with a German board of directors, is said to be behind the timber by rail scheme. Local media reports state that the company intends to establish a rail loading facility at the remote Highland community of Altnabreac. The project is backed by the statutory regional transport partnership Highlands and Islands Transport Partnership (HiTrans) and Scottish Woodlands, a significant forestry management company headquartered in Edinburgh.

Timber was once a common commodity on the rail network in Scotland. However, the traffic has been lost to the road over the past two decades. Last year, that trend was reversed with a successful trial of timber movements from Georgemas Junction on the sparsely populated Far North Line. Now commercial interests are seeking to establish their own operations on the same route, but operating from a point twenty miles (32 kilometres) south at Altnabreac, adjacent to large forest plantations that are mature and ready for harvest.

The operations would involve the installation of a modest terminal facility – possibly simply a lineside trans-shipment and loading operation – to allow forest track vehicles to stockpile and load raw timber on awaiting trains, avoiding heavy vehicles on the local rural routes and any long-distance road trips on the busy A9 main road through the region.

Scotland has attracted much foreign investment in timber production, which has fostered a healthy management sector in the country. “Scottish Woodlands Ltd harvests over one million tonnes of timber every year”, says the company behind the management of a large proportion of the foreign-held assets. “We have the knowledge and expertise to undertake work at any scale and any location, supplying all of the major UK and export markets.”

All that stands between ambition and operations is a successful planning application. HiTrans manager Frank Roach has told local media that he is confident the operations will win approval. “Rail freight fits well into the decarbonisation agenda and also reduces wear and tear on the road network. There is a lot of timber to come from this area, and if we can demonstrate the efficiency of this, then it will hopefully persuade others to move ever greater volumes by rail.”

The operation is planned as a demonstration and, if successful, may be extended. The six-week trial last year moved around 6000 tonnes from a plantation further north.

2 comments op “Scotland’s next phase of timber by rail”

Dave Wilson (Beaconsfield) – my understanding is that direct delivery by rail to the timber processing facility east of inverness was necessary to make tinber shipments economic. Laying sidings there should be the first step.

First step should be to lay sidings at the timber receiving facility at Dalcross.