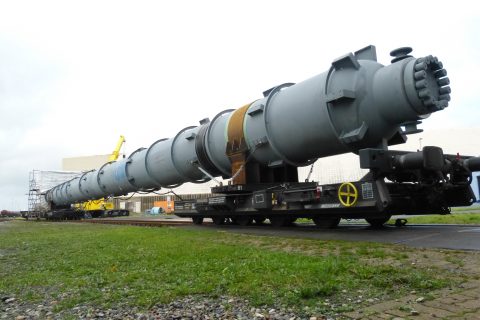 In RailFreight Live today: project cargo on the train

An object of 250 tonnes and 30 metres length. This is the largest object that DB Cargo transported by rail. This is not any cargo, it is project cargo, which includes all objects that do not fit in a container. In Railfreight Live this week, we hear more about project cargo on the train.

This week, the Project cargo Summit took place from our studio in Rotterdam. In this three-day summit about the particular industry, representatives from all modalities explained the advantages and challenges of their industry. The strength of rail is mostly in carrying weight: not everything fits through a tunnel, but wagons on a train are capable of carrying very heavy objects, explained de Ridder from DB Cargo in an interview with RailFreight Live.

Ambassador of the European Year of Rail

You can watch RailFreight Live at 1pm CEST today on our YouTube Channel. If you subscribe, you will be notified when we start. You can also watch the show on our Linkedin Page, or below.