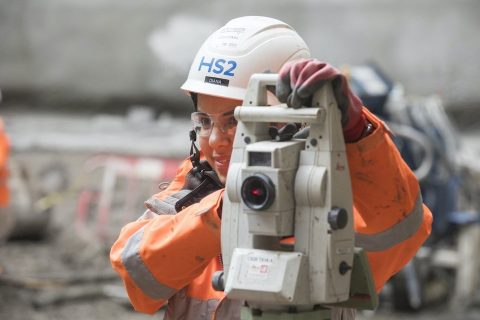 One year on from the start of construction, the UK’s high speed rail project – HS2 – is celebrating an employment landmark. Exactly one year since the UK prime minister Boris Johnson announced the formal start of construction on the London-Birmingham phase, HS2 Limited registered 20,000 jobs on the project.

Work has continued on HS2 throughout the Covid pandemic. Over 20,000 jobs are now supported within the project. According to HS2 Limited, the company formed specifically to build line, the high capacity railway is set providing low carbon transport, with many thousands more jobs and UK businesses supported through the wider supply chain.

HS2 has been at pains to emphasise its capacity enhancing credentials, with particular relevance to the rial freight sector. Primarily, the project will relieve congestion on the West Coast Main Line, the busiest mixed-traffic route in Europe. The company has also embraced the rail freight industry, particularly at the southern end of the project, in and around London. The vast development at Old Oak Common in the west of the capital is significantly supported by the HS2 “Materials By Rail” initiative.

“The latest employment figures demonstrate the crucial role that HS2 is playing in the UK’s economic recovery, with work having continued throughout the Covid-19 pandemic”, said a statement. “Companies right across the country are now forming part of HS2’s ever growing supply chain. Contracts have already been awarded to over 2,200 businesses, 97 per cent of which are UK-based.” HS2 say a further 25 billion pounds worth (almost 28 billion euros) of opportunities are expected to flow out into the wider supply chain during the project.

Despite disappointment at the recent reports that the project may well be scaled back, and links to the east of the country may be shelved, the UK transport secretary Grant Shapps expressed his ambitions for HS2.“It’s been an incredible year of progress”, he said. “Work continues across the country to deliver a new backbone of Britain’s transport network.”

“While there have been some issues with the project in the past, hitting the landmark of 20,000 jobs underlines the unstoppable momentum HS2 now has”, added the minister. “It’s been an incredible year of progress as work continues across the country to deliver a new backbone of Britain’s transport network, fit for the twenty-first century and beyond. Reaching this landmark is testament to the hard work and dedication of all those involved in the project.”

Significant lengths are being tunnelled

In a bid to reduce the environmental impact of the line, significant lengths are being tunnelled under sensitive rural locations. Rail freight is playing a huge role in moving tunnelling spoil, especially from the civil engineering base in Buckinghamshire. A new railhead there, near the village of Calvert, is helping the project continue to deliver construction material by rail without putting extra lorries on local roads.

“We’re enormously proud of the progress we’ve made on HS2 since the prime minister gave us the go-ahead last year”, said Mark Thurston, the chief executive of HS2 Limited. “We have already launched our first two tunnelling machines, with more to launch in the coming months, and construction of our stations and depots are well underway. HS2 is moving forward, creating jobs, enhancing skills, benefiting UK businesses and building a low carbon, high capacity railway that will change the way we travel in Britain.”