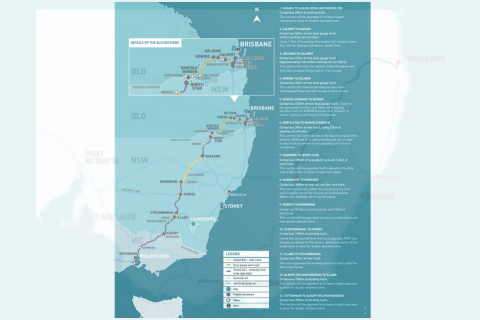 Work is underway on a project that has been the talk of Australia since the nineteenth century. Inland Rail is a 1700-kilometre project to provide a freight corridor between Brisbane in the north and Melbourne in the south. The added capacity will transform freight handling Down Under, but the project has been dogged with controversy and opposition.

Inland Rail will provide a consistent standard gauge connection from Melbourne to Brisbane as well as a dual gauge connection in Queensland to allow seamless connectivity with Queensland’s narrow-gauge network. The project backers say shifting more goods from road onto rail is the right move for Australia.

“Work on Australia’s largest freight rail infrastructure project – a priority infrastructure project for the Australian Government – is well underway, and we are working with regional businesses and communities to make it happen”, says the headline from the brochure. “Inland Rail means freight can be delivered faster and more reliably to our growing population, and beyond to global markets”, according to the delivery company’s statement. “It also means safer, less congested roads and fewer carbon emissions.”

However, the railway has met with opposition on cultural and environmental grounds. The route cuts across some sites sensitive to Aboriginal peoples, and some groups have raised concerns over wildlife and water-table issues. The defense of the project: economic development, environmental sensitivity, and the vast improvement in capacity for freight traffic. Indeed, the Inland Railway is designed with freight as its primary motivation.

But, critics say the line has significant flaws – in that it doesn’t have the right destinations and will not return its investment in any realistic timescale. A brief review of news stories will show the project budget rising year on year too.

Levelling up Down Under

However, not ignoring certain advantages – such as the cost of buying land in the Outback compared with the Aylesbury Vale in Buckinghamshire – Inland Rail is certainly delivering more railway bang for the Australian bucks.

At 1,700 kilometres of new and refurbished route, it is about ten times the length of UK’s HS2 and around five times longer than all the rail development projects underway or planned in the UK.

Construction was begun in the north, and will purposely divert traffic away from the over heated market around Sydney and Canberra. Levelling up the economy is certainly not a too ambitious goal of this project.