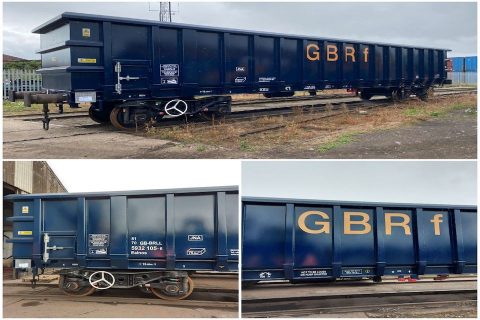 The conversion and upgrading of redundant coal hopper wagons has not only given a new lease on life to perfectly serviceable freight rolling stock, it has given an extra feather in the cap to the specialist manufacturer WH Davis. The company has added to its portfolio and reputation with the delivery for final fitting of a bespoke very-high capacity open box wagon. It’s the first example of an order of 46 such wagons for Beacon Rail.

British manufacturing at its best

As the last independent freight wagon manufacturer in the UK, WH Davis has become the go-to provider for specialist rolling stock requirements. This order was placed by Beacon Rail back in March, perfectly fitting in with the curriculum of the manufacturer. Revitalising redundant rolling stock has become a niche market for the company.

The work is being completed at the company’s Langwith Junction works, in the English East Midlands. Les Bryant, the group engineering director at WH Davis Group, the parent company of WH Davis, was proud to announce the rollout. “The first of 46 WHD Megaboxes is almost complete for our customer Beacon Rail”, he said. “The photos do not do justice to the size. There are still a few final touches to be done. British manufacturing at its best.”

The company has also announced its own refurbishment to increase capacity at its Langwith Junction facility by replacing the roof on the Belfast workshop. “The replacement of our Belfast workshop roof is complete”, says Bryant. “The roof has been raised to allow the use of overhead cranes, and the ability to lift wagons off bogies. This 0.3 million pound (0.34 million euros) project is part of future plans to increase our capacity, and improve efficiency”, he said.

The Belfast shop is a piece of industrial heritage, updated for the twenty-first century. It gained its name due to the design of wooden lattice roof, explained Bryant. “It was a Great War aircraft hanger which was moved to Langwith in the early 1920s”, he said. “The roof has now been replaced after almost 100 years, but we will continue to call it the Belfast shop”.