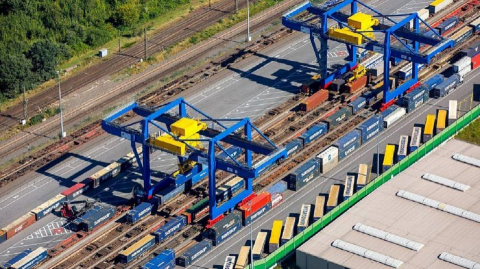 Hupac will add a new terminal to its network. Duisburg Hohenbudberg will be the company’s new stop on the way to Poland, while it will also open new opportunities for connections to southern Germany and northern Italy.

Hohenbudberg will connect with three weekly roundtrips to the Gądki terminal in Poznan and the Pruszków terminal in Warsaw. METRANS operates both terminals. For Hupac, the new location is also ideal for connections with Singen in southern Germany, which functions as a gateway towards Switzerland and Italy.

Hupac has an extensive intermodal network in Europe. During the last few months, the company expanded its existing services with more weekly roundtrips and added new ones. The new terminal in Duisburg is part of this expansion procedure that started in late May and will continue until September. The intermodal company has two patterns when it comes to network building.

Firstly, it focuses on building a dense network by connecting locations not far away from each other. As a result, it utilises the characteristics of each terminal to the maximum and takes advantage of the alternative routes each one of them provides.

Secondly and most importantly, the Swiss-based company builds crossroads. The example of the Hohenbudberg terminal is very typical. It is a terminal that offers seamless connections towards a specific direction. However, it can also function as a gate towards a completely different part of Europe, and that is the added value it brings. Hupac focuses on this strategy, and most probably, it pays off since it offers many options to customers without restricting them to specific routes.