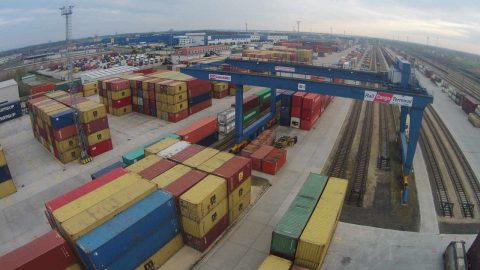 Crane repair at BILK terminal is in full swing

The repair of one of the two cranes at BILK terminal in Budapest reaches its final stage. Reconstruction work is underway, and after the crane’s reassembling and testing, it will be operational again by early September. But why was the crane off in the first place?

As Rail Cargo Group explains, the BILK terminal operates with two gantry cranes. However, an accident on 29 July 2020 forced the company to rebuild one of the two cranes. During operations, a reach stacker hit the gantry crane and caused statical instability. After disassembling it, the technical and engineering staff of BILK begun repairing the movable parts in off-site factories, while parts unable to move were repaired on-site.

At the moment, repair works focus on structural and mechanical features as we speak. The following steps include assembling the machine in several stages, connecting it to a power grid, and running tests before putting it back to operations in September.

After the accident, the BILK terminal suspended rail operations for a short period, while it was operating at a limited level until the emergency was over. Subsequently, the terminal had to implement some temporary measures to ensure that operations would continue smoothly. For instance, there were closures and changes to traffic regulations at certain points. Moreover, storage and train loading needed reorganisation to provide space for the crane repairs.