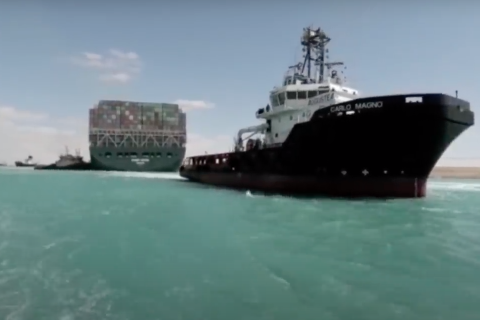 Ever Given reaches Felixstowe, UK

The port of Felixstowe has finally received at the quayside the much delayed Ever Given. Τhe vast container ship which ran aground in the Suez Canal in March and caused a worldwide trade calamity has docked in the UK, at its final destination before retrial for extensive repairs. Rail freight operators are gearing up for an extra busy week, distributing its cargo to impatient customers around the UK.

With around ten per cent of its 18000-container capacity still on board, the infamous Ever Given mega-ship finally berth at Felixstowe in Suffolk, UK, on Monday (2 August). The vessel had been scheduled to arrive in late March. It is just possible you have already heard that the ship ran aground in the Suez Canal and caused some disruption.

Rail destinations all over the UK

Felixstowe is the busiest intermodal port in the UΚ and among the busier ports in the world. It is also the UK’s busiest coastal rail-freight facility, dispatching around a dozen trains every day. That figure is set to rise as the logistics industry raises to the challenge of distributing the mountain of cargo stallion board.

Something over twenty train-loads of containers are on board. While the ship’s consist is not all earmarked for rail distribution, a sizeable proportion is due to make its way to terminals as far apart as Birmingham, Manchester, Leeds, Cardiff and Glasgow. Some intended cargo has already arrived in the UK through the New Silk Road, which saw an upswing in traffic immediately after the ship ran aground.

Delay-repay may be familiar to frustrated passengers on the UK network. Still, the prospect of getting your fare back for an extra hour spent onboard is but nothing compared with the compensation plan worked out for the somewhat tardy Ever Given. The compensation plan eventually agreed between the ship’s operators and the Egyptian government ran to around 800 million dollars (675 million euros). That figure equals the estimated value of the cargo on board, but it is a mere fraction of the estimated 58 billion dollars (49 billion euros) lost to world trade.

Will all that trade be recovered? Probably not. Certainly, not all of the cargo on the Ever given will be recovered. A fraction of the payload was perishable goods, which are now beyond agreed consumption dates. Four-month-old fruits and vegetables are possibly not what importers had in mind. With apologies for any inconvenience caused, the intermodal service leaving Felixstowe is running approximately 129 days late.