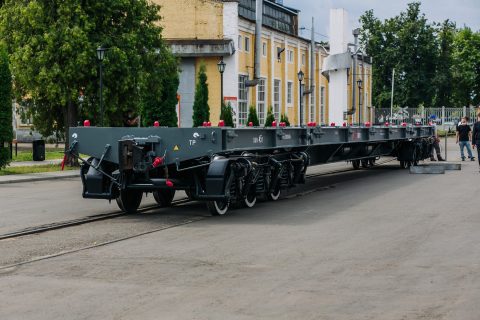 Sinara Transport Machines Holding (STM) has developed a high-speed flatcar able to transport containers at a speed of 140 kilometres per hour. It is the latest addition to a series of high-speed rolling stock equipment that will allow Russian Railways to transport containers from China to Europe in seven days. The high-speed flatcar is produced on behalf of the Federal Freight Company JSC, a subsidiary of Russian Railways.

The new flatcar model was developed jointly by STM, RPM Group (part of STM Holding), and the JSC Scientific Research Design and Technology Institute of Rolling Stock. Produced in Kaluga, western Russia, the flatcar prototypes will undergo test runs during July-August at the Experimental Railway Ring in Shcherbinka. There they will run at a speed of 120 km/h. After that, the flatcars will go to the Belorechenskaya – Maikop high-speed test site of the North Caucasian Railway, where they will operate at a speed of 140 km/h. The tests will be carried out with loaded containers.

The high-speed flatcar is 80-feet long and travels on six axles that incorporate a pair of three-axle bogies. The advantage of the three axle-bogies lies in the fact that weight is distributed more evenly, with each axle charged with carrying around 20 tons. Due to its length and weight distribution, the flatcar can transport two 40-foot containers per time.

“It is planned that, in the future, such flatcars will be used for the transportation of goods in the direction of the Far East – European Russia, and delivery of delicate goods with high added value from China to Europe at speeds equal to the speeds of passenger trains. The implementation of this service will allow the Russian Railways to offer a new high-margin product to markets,” explained Andrey Shevtsov, Deputy General Director for Technical Development and Chief Engineer of FFC, JSC.