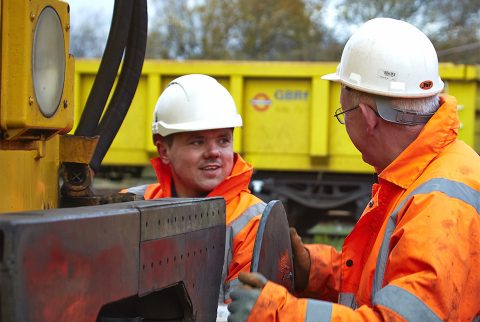 Eastleigh two years in the making

Both Local Distribution Centres act as the day-to-day management points for the shunting, marshalling and preparation of trains needed to support engineering works carried out by Network Rail, the national infrastructure agency.  Support for engineering works is a significant business for UK rail freight operators.

The work on Eastleigh LDC, in Hampshire in the south of England, has been two years in the making. GBRf say they have replaced and updated facilities for staff and management, including operational meeting rooms, as well as a vantage point that overlooks the yard. Other works are intended to improve the site’s efficiency, which in turn supports more efficient on-track operations. Among other services, Eastleigh is an important site for rail stock store and distribution.

Bescot, a well-known railway location near Birmingham, supports works throughout the West Midlands – an area critical to UK manufacturing and logistics. Bescot LDC has undergone a series of works to repair and renew underinvested and unsafe tracks at the site. The project included removing abandoned buildings, lighting upgrade works, and a range of other safety measures. A new siding capacity will be installed using recycled rail and sleepers.

The West Midlands is set to see significant increases in rail activity, both passenger and freight. The HS2 project, which already generates significant rail freight construction traffic, opens in 2029, connecting Birmingham with London. Rail freight logistics operations are growing in the regions too, with several terminals in operation, and the long-proposed West Midlands Interchange recently given the green light.

The significant working-environment improvements at Bescot were backed by Network Rail Supply Chain Operations (SCO) and the Network Rail Freight Safety Improvement Fund. Mike Black, Supply Chain Services Director for Network Rail, explained the significance of the works. “Local distribution centres may not instinctively sound like the most critical part of running a railway, but they’re absolutely vital to maintaining and renewing the railway and keeping our passengers and freight moving”, he said. “The improvements delivered at Eastleigh and Bescot are part of our wider strategy to modernise supply chain operations sites to make working practices even safer and more efficient while also improving performance.”

As the operating partners in the projects, David Golding, Asset Director of GB Railfreight, was sure the improving climate for rail freight justified the time and effort. “Our partnership with Network Rail has seen the completion of both projects on time and within budget, providing the facilities needed to ensure the smooth running of LDCs”, he said. “ This work will help to bring LDCs into the twenty-first century, as we see demand for UK-wide possession and support services increase post-pandemic.”

GB Railfreight is the third largest rail freight operator in the United Kingdom, with a turnover expected to exceed £225 million in 2021.