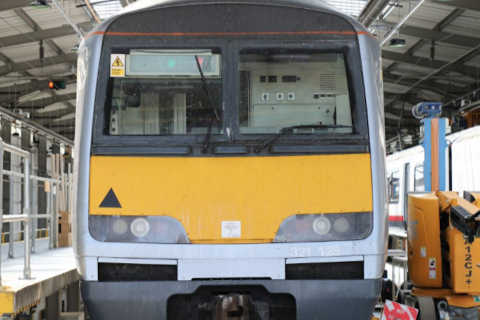 The changing face of rail operations in the UK has taken another step forward. An example of the former high-density commuter passenger electric multiple unit class 321 has been rolled out in a new guise. Rebranded as the Swift Express, the 100mph (160kph) EMU is now ready to serve the fast-growing market in parcels and light logistics.

Rolling stock leasing company Eversholt Rail has unveiled its rebirth of the class 321 passenger EMU as the “Class 321 Swift Express Freight Train”. With several potential operators in the wings, the project has been eagerly awaited by the industry. The conversion, which began earlier this year, was supported by Ricardo rail and engineers at Wabtec, who carried out the works at their Doncaster facility in the northeast of England. Eversholt says the programme to convert class 321 into an express freight train has now been successfully completed, and the train is service-ready.

Light logistics and parcels are widely seen as a growth area for rail freight. Ever since the demise in the mid-1990s of the nationwide “Red Star” service operated by the publicly-owned British Rail, only a small number of specialist companies have operated light logistics by rail – mainly in premium niches. However, that is set to change with several potential operators keen to re-enter the market and cater to the exponentially growing delivery and online logistics market. Eversholt anticipated that the revamped class 321 Swift Express Freight trains would provide a cost-effective and low carbon solution to those operators for transporting parcels around the UK.

In direct conflict with government-mandated targets, rising delivery van and heavy lorry traffic is increasing congestion, carbon emissions and air quality issues. The increasing number of road vehicles and their size, together with stringent emissions legislation on the part of urban local authorities, is posing a significant problem for logistic companies and impacting deliveries into city centres. With the proven potential to operate into existing passenger terminals, as well as dedicated rail logistics facilities, the reborn class 321 Swift Express Freight will, according to Eversholt, provide fast and reliable rail services, encouraging modal shift and contributing toward the target of net-zero emissions by 2050.

Swift move into service this year

The train has been designed to maximise capacity for parcels and light goods whilst ensuring the interior is flexible to meet individual customers’ operational requirements. In practice, that has meant removing passenger features, installing new flooring, and industry-standard fixings throughout. Paul Sutherland, the Client Services Director at Eversholt Rail, emphasised that this was just the first example to be completed and ready for service. “Collaborating with both Ricardo and Wabtec on this project has delivered a train that will demonstrate the potential for a cost-effective, low carbon solution to meet the growing demand for home delivery of parcels around the UK and contribute towards the 2050 net-zero emissions targets”, he said. “We look forward to seeing the Swift Express Freight train running in service later this summer.”

Sutherland’s words were echoed by Jonathan Brown, the Technical and Innovation Engagement Lead (Rail) at Ricardo, and Andy Derbyshire, the Group Managing Director of Wabtec UK. “Our team in Doncaster has done a superb job delivering this important milestone project, and we look forward to seeing the train produce genuine carbon and cost reductions”, he said.

The electric multiple units were originally developed by British Rail Engineering Limited (BREL) just before the privatisation of the industry in the UK. They were first deployed between 1988 and 1990 on longer-distance commuter services. Around 70 of the production run of nearly 120 four-car units remain in service. The design remains successful, and despite being displaced in some instances by more modern units, there are development plans for the fleet. These include trials of hydrogen fuel cell technology, with an operational target date of 2024.

The unit needs a last-mile capability for non-electrified lines, with either a diesel or battery engine. Also, if you go to the north-east of England, you will not find Doncaster. Doncaster is in South Yorkshire.