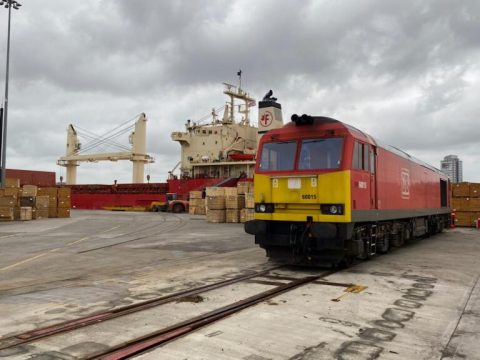 DB Cargo UK is steeling itself for new business, as the UK carrier has signed a deal to transport heavy trains of coil for a new-to-rail customer. On behalf of precision steel tube manufacturers Marcegaglia, the Doncaster-based rail freight operator transported almost 3,000 tonnes of steel coil from the Port of Sunderland to Marcegaglia’s steel logistics centre in Wolverhampton in the English West Midlands.

Steel multi-national Marcegaglia has become a new customer for the UK rail freight sector. DB Cargo UK has operated two heavy haul trial trains from Sunderland in northeast England to the steel company’s facility in Wolverhampton. The 200-mile (360km) working has galvanised the new relationship between the customer and the operator and their confidence in future workings.

Marcegaglia is the largest independent global operator in the steel processing industry. They are the largest precision tube manufacturer in the country, with facilities in Dudley in the West Midlands and Rotherham in South Yorkshire. The Italian-owned company’s entry into the rail freight market is evidence of growing interest in the sector. Given the bulk nature of the operations, both the client and the carrier are keen to point out the environmental benefits.

DB Cargo UK says it moved almost 3,000 tonnes for Marcegaglia in two consignments. “The service, which has run twice during June, removed the need for more than 120 heavy goods vehicle (HGV) movements, thereby reducing congestion on the UK road network and carbon emissions”, said DB Cargo in their statement. “The two trains were the first commercial freight trains to be loaded in the Port of Sunderland for more than 20 years, making it an extra special success”, they added.

With a wait of twenty years now over, there is considerable excitement at the originating point too. Matthew Hunt, director at Port of Sunderland, said it is fantastic to see a commercial cargo train being loaded in the port again. “This is something we have been working towards for some time, and the team here has been working hard to have the port’s rail connections ready for such an operation. Loading cargo to trains can bring many advantages. This train alone removes the need for over 60 truckloads of cargo from our roads – not only does this provide a cost saving for the customer, but it significantly reduces the road miles, congestion and most importantly, the carbon emissions associated with so many traffic movements.”

Rail freight has always played an important part in the steel industry. DB’s Head of Sales, Roger Neary, concluded with a comment on the importance of the new business to his company and the sector. “Marcegaglia is a prestigious addition to DB’s portfolio of customers in the steel sector and further strengthens our reputation as the biggest mover of metal products in the UK.”