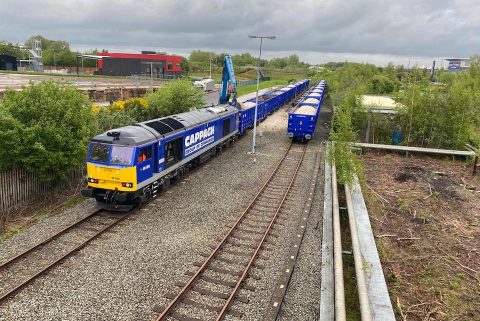 DCRail doubles up on new aggregates flows across the UK

DCRail, the Derby-based bulk transfer specialists, have celebrated the start of June by announcing two additions to their portfolio of operations. The company posted pictures and commentary on flows from the north west to east of England and in the opposite direction to Merseyside.

Construction and aggregates traffic is not just confined to the booming London and South East. DCRail, have announced successful operations which cross the country from West to East supporting both the construction industry and manufacturing.

The commercial benefits have been underplayed in favour of the environmental advantages. DCRail claim the movements will remove 110 long-distance road truck movements each week.

“This week saw the successful first DCRail delivery of sand into St Helens”, said David Fletcher, the director of rail at Cappagh Group of which DCRail is part.. “This will be a weekly service that will see a reduction in lorries traversing long distances across the country, providing positive environmental benefits for the whole supply chain. Alongside this we have also started moving limestone from the Peak District into East Anglia.

Saving the remains of the main line

While the quarries of the Peak District in Derbyshire are well known as sources of construction materials, there’s less emphasis on the resources of Norfolk. The low-lying and largely rural east of England is better known for its agricultural produce, rather than its mineral wealth. However, DCRail is taking train loads of sand from the loading facility at Middleton Towers, near King’s Lynn, for weekly delivery to St Helens for use in the manufacturer of glass.. “Well done to everyone at DCRail for all the hard work that has gone into starting this new traffic over the last few weeks”, adds Fletcher.

DCRail’s continued use of the infrastructure serving the sand loading silo has helped retain the remains of the once busy main line that ran eastwards to the market town of Dereham and eventually the county seat of Norwich. 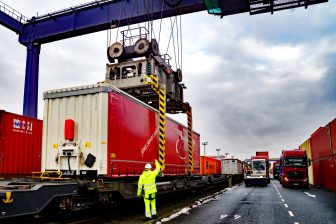 We need a new rail head in the Norwich area. The present rail head is in the centre of Norwich and the HGVs making the final delivery have to use very busy City roads. There are huge housing and infrastructure projects to the North and East of Norwich which could be served by a new site.