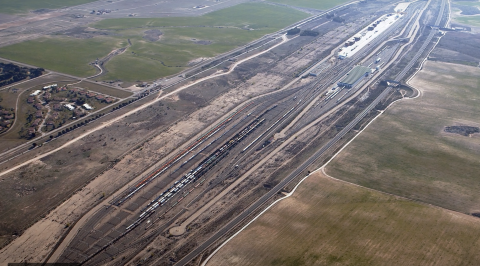 A new rail freight line is active in Spain between the port of Valencia and the Zaragoza rail terminal. The two terminals operated by COSCO SHIPPING have already seen two trains running between them. CSP Iberian Rail Services set up the service and will be its train operator. Moreover, the whole project required investments exceeding 100 million euros by the port authority of Valencia.

Zaragoza is the main focal point of the development since, for Cosco, it functions as a key for linking its two Spanish hubs: Valencia and Bilbao ports. In fact, if the connection proves beneficial in practice, Cosco and CSP consider extending the line from Zaragoza further to Bilbao and create a comprehensive north-southwest Spain corridor.

Nevertheless, Cosco is not the only one reaping the benefits of this connection. Zaragoza might be a key destination for the company; however, the region of Aragon, in which the city belongs, will also have some gains. Aragon is bursting with regional businesses that will now have the opportunity to reach an international customer base through Valencia. With a stable connection to the port of Valencia, Aragon acquires access to 168 countries worldwide.

Additionally, the Plaza Zaragoza logistics platform in the city has a lot to offer in all directions. The intermodal logistics platform is among the biggest in Europe, connecting Spanish hubs with Europe and the world. Specifically, the location sees 80 weekly rail freight connections between Aragon-Barcelona and Valencia-Bilbao, and 21 flights to Mexico, European countries and Asia. In simple words, the region and city are a hotpot for logistical developments.

Valencia’s port authority has a very active role in strategically investing in Zaragoza and the broader region. The last few years have seen the company spending up to 105,6 million euros on rail tracks construction and upgrade projects. One instance is the works on the Sagunto-Teruel-Zaragoza line and the adaptation of tracks to accommodate 750-metres long trains.

Valencia sees vast potential in exporting Aragonese products and does its utmost to facilitate rail access to the region. The focus is on rail because Valencia’s port authority considers it optimal for logistical development and better connectivity with Trans-European networks.