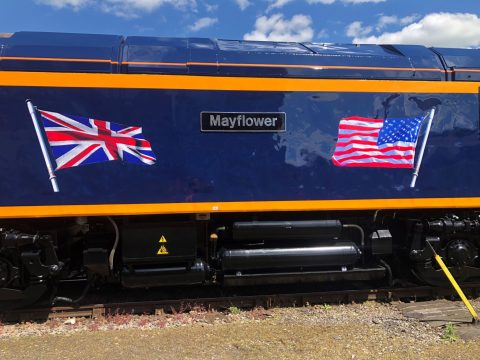 UK freight carrier GB Railfreight (GBRf) has unveiled a commemorative locomotive, painted in a livery designed to evoke the memory of the most famous immigrant expedition in British history. It’s just possible that Americans feel the same way too. The sailing of the Mayflower, almost 401 years ago, has been commemorated in a special livery evoking the heritage of both the UK and the USA. The unveiling took place just as the G7 economic conference concluded in Cornwall, not far from the departure port of the original Mayflower.

As names go, 69001 does not have the historical importance of Mayflower, but the designated first example of the class 69 locomotive now carries an emblematic tribute to the Pilgrim Fathers, the famously religious migrants who sailed in 1620 from Plymouth in Devon, and established a colony of the same name in modern-day Massachusetts. Their voyage is credited with founding, among other traditions, the observance of Thanksgiving.

GB Railfreight has restored and renovated the first example of its class 69 diesel motive power. Originally built as class 56 (56031) for British Railways between 1976 and 1984, the locomotive was part of a run of 135 examples. However 69001 “Mayflower” is significantly different to the original marque upon which it is based.

The biggest change is the replacement of the original Ruston-Paxman engine with a North-American built Electro-Motive Diesel EMD710 3A Emission power unit offering improved environmental benefits and better fuel economy. The locomotive also has a suite of electronics added to significantly update control and monitoring.

Finishing of the locomotive in a commemorative livery coincided with conclusion of the G7 economic conference in Cornwall, where the UK prime minister, Boris Johnson met with the new US president Joe Biden. “Name a more iconic Anglo-American meeting,” says a statement from GBRf – although referreing to a rather earlier meeting on the shore of Cape Cod. “Today marks the unveiling of the first Class 69 locomotive, 69001 “Mayflower”. 69001’s new livery represents the longstanding relationship between GBRf and Progress Rail, A Caterpillar Company.”

The acknowledgement of North American connections has given GBRf a slick marketing opportunity to showcase their reworking of a British designed workhorse. Although the class 56, upon which this locomotive is based, were originally built in Romania, concerns over quality saw production switched to Doncaster for the bulk of the run. Most of the class have been withdrawn from service, but around 30 examples still remain extant.

GBRf says the new livery honours the nations of both themselves and Progress Rail. “The locomotive, specially painted to carry the flags of both companies home nations, is named after the Mayflower ship which first took the founding fathers from Plymouth, UK, to Cape Cod, Massachusetts, over 400 years ago”, says their statement.

The livery was commissioned by GBRf and applied by Arlington Fleet Services in Eastleigh, near Southampton. As freight operators are well aware, Southampton has grown to be one of the most significant trade ports in the UK. Plymouth, around 150 miles further west (240km) has become predominantly a naval base in its own right.

Both Southampton and Plymouth were pre-eminent in the days of the trans-Atlantic liners, when passengers cross the ocean in rather more comfort than the families of the Pilgrim Fathers. Latterly, Southampton has been a departure point for cruise liners, with many passengers delivered to the quayside by rail – a lucrative contract for freight hauliers. Locomotives like 69001 were frequently employed on such contracts, bring cruise connections from destinations as far away as Edinburgh.