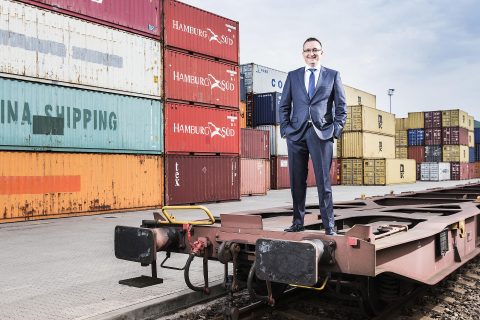 A railway company seeing the sector’s challenges as a fuel for improvement can be exceptional. Additionally, not perceiving the progress of other companies as competition but as a benefit for the rail industry is also an interesting perspective. For METRANS, this is normal since the company attempts to focus on other things like keeping its identity intact and making political decisions happen.

Peter Kiss, CEO of METRANS, shared these views in an interview with RailFreight.com. He took a look back in his career with METRANS and discussed some of the burning issues that the rail sector faces. One of them is political proclamations that never become actions.

Initiating the discussion from the European Year of Rail perspective, Peter Kiss pointed out that making political proclamations is not enough. Initiatives like that are, of course, essential to highlight and promote the importance of rail freight. However, these alone could prove more harmful than helpful. The focus should be on other problems like poor infrastructure and low capacities, which frequently hinder the sector’s expansion.

After all, rail freight has proved its value in many cases. The pandemic, the Suez blockage issues were all instances where the sector delivered its objectives and facilitated transportation on a continental and trans-continental level. Hence, Kiss believes that the added value for the European Year of Rail would not be celebrations but to implement real solutions to real problems.

Neutrality is our driver

As for METRANS itself, the company prefers to make the most out of the sector’s problems. “The poor conditions and challenges that we face occasionally are our fuel for further growth,” says Kiss. Simultaneously, the company tries to maintain its identity through the years.

“Although much has changed in the market, we still follow the same strategy. We went into new markets, and we became a railway operator with our assets like the locomotives and railcars. However, we still and always will stick to our goal to be a neutral service operator with terminals, trains and additional services”, he adds.

Not everything is about competing forces

The Czech Republic is becoming of central importance lately when it comes to the New Silk Road. Kiss firmly believes that the country has much potential, even though it is still a ‘newcomer’ in this market. Proving the vital role of Central-Eastern Europe on the New Silk Road is the main objective. However, this role is very particular.

“We do not aim, for instance, to take over the role of German hubs participating in the New Silk Road,” mentions Kiss. The freight cargo itself decides the optimal destinations and Markets, so “we need to interpret cargo as a passenger who knows his final destination”. The only thing that we can do is ensure that cargo destined for Central and Eastern Europe goes there without diverting to other destinations.

At the same time, developments in other countries do not constitute a problem either. “Investments, like the ones in Hungary”, says Kiss, “should not be conceived as plain competition.” In contrast, they should be welcomed as possibilities for more expansion and a better railway network in Europe.

It’s necessary to enjoy it

Regarding his career in METRANS, Kiss underlines that it was all about business chemistry. “It was back in 1999 when I joined METRANS because of the vision. I already knew Jiri Samek, founder and long-time CEO of the company. In the same year, we decided to re-start intermodal transport in Slovakia and as a further step to develop Hungary as well. This new challenge was the ‘click moment’ when I immediately decided to join METRANS”, he recalls.

After 22 years in the company, the secret of success lies in enjoying every day. “This is an old friend’s advice that I try to stick with”, says Kiss. Nevertheless, the team also plays a crucial role since it manages to handle many responsibilities while also remaining free to develop strategies and implement them.