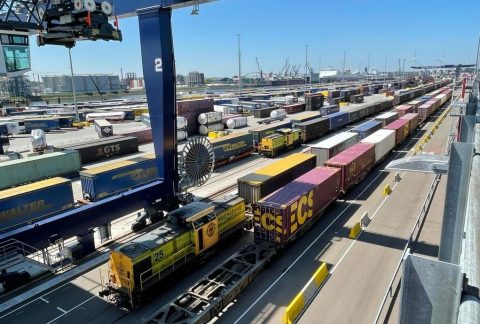 First trains between Rotterdam-Pordenone on the way

This week was the starting point of Hupac’s new shuttle between Rotterdam and Pordenone in northern Italy. On Tuesday 1 June a first train departed in both directions. A second train is scheduled for today, Thursday 3 June. It is the start of a new, three-weekly link to to the north of Italy.

To be precise, the new service links the Rotterdam C.RO terminal in the Netherlands to the Hupac-owned terminal of Pordenone in the north-east of Italy. In May this year, Hupac launched a direct line between Novara, in the north-west of Italy, and Pordenone. This railway line now allows for an extension of the Rotterdam-Pordenone service to the Italian hub.

From the C.RO terminal in Rotterdam, the Cobelfret Ferry service links to London and Killingholme in the UK. According to Hupac, the railway line has a seamless connection to this short-sea link, in order to enable further transport across the Channel.

Below is the timetable of the new service.

Starting from May, Hupac has gone on an expansion drive of new services. These developments will focus on regional expansion in Italy and the growth of Hupac’s European network by adding new destinations. Apart from the Novara-Pordenone service, it is launching the connection Busto Arsizio-Marzaglia/Modena. This is a short rail connection in the North of Italy, which will put Marzaglia/Moderna on Hupac’s intermodal map. It will take off in September.

Also on the agenda are a new connection between Cologne and the port of Kiel in Germany, and a new link Zeebrugge-Brescia, providing a new link between Belgium and Italy. Apart from the new rail links, the company also focuses on adding more roundtrips to existing connections to allow for better interconnectivity in its network.