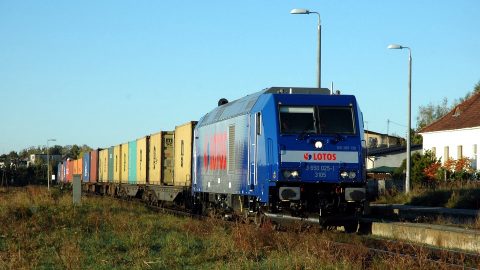 LOTOS Kolej has carried out its first transport in Lithuania using an M62K locomotive. The Polish carrier signed a cooperation agreement with Lithuanian LTG Cargo enabling it to transport cargo through Lithuania to Poland and other neighbouring countries. The deal between the two companies is valid since the end of May.

LOTOS Kolej is the second-largest rail carrier in Poland. The company is also active in Germany and the Czech Republic. Additionally, it cooperates with other carriers on an international level to enhance cross-border and long-distance transport. The case with LTG Cargo is similar, only that this time LOTOS will operate its trains while expanding and integrating its network. “The agreement opens the way for us to transfer cargo, primarily containers in cross-border shipments from and to Lithuania, to the southern or western border of Poland,” commented Anatol Kupryciuk, President of the Management Board of LOTOS Kolej.

However, LOTOS Kolej will not access all of Lithuania’s railway network. The rail routes between Poland and Lithuania differ since the two countries use different track gauges. Specifically, Poland uses the standard track gauge (1435mm), while Lithuania uses the broad gauge (1520mm).

There is only one exception on the route between the Trakiszki-Mockava border-crossing and Kaunas with a standard track gauge. This is the route that LOTOS Kolej’s trains will follow after entering the Baltic country. Despite the reduced availability of tracks, this is still a good opportunity for the Polish company since it will access Kaunas, Lithuania’s second-largest city and important economic centre.