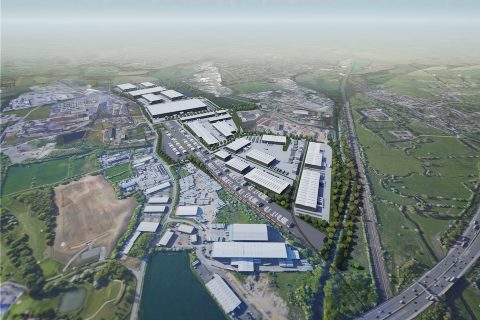 An abandoned steel works site and a long disused rail terminal have finally been brought back to commercial life. GB Railfreight and a consortium of business interests have collaborated to bring operations back to Stanton in the English Midlands, with the first commercial flow in over a decade leaving the site on 13 May.

Plans for the repurposing of Stanton Ironworks in Ilkeston, the former metals manufacturing site near Derby in the English Midlands, have taken a significant step forward. At short notice, GB Railfreight (GBRf) operated a train of 1,400 tonnes, carrying assorted steel fragments from the site, to the docks at Immingham bulk terminal for onward shipping. The operator has called it an opportunity to breathe new life into the local economy.

Rail at heart of Stanton plans

In collaboration with their commercial partners, GBRf has just released details of their first Stanton operation. The service was the first to leave the Stanton site since 2009, and followed a series of trials over the dormant infrastructure. GBRf, who were operating on behalf of Ward, a major waste, recycling and remediation company based in nearby Chesterfield, said it was the first loaded freight service from Stanton in over twelve years.

Ward has been at the heart of plans for Stanton for some time. They reported back in 2020 that the long-term plans for the site revolved around the rail freight infrastructure already in place. GBRf has been collaborating on the revival of the site, providing motive power and rolling stock for trial movements.

The site at Stanton was recently acquired by Verdant Regeneration, a joint venture between Ward and Trust Utility Management, an infrastructure contractor and management company local to the area. The consortium, registered as Verdant JV, has plans to transform the former steel works – one of the largest potential development sites in the East Midlands – into a national distribution, logistics and rail freight hub for the Midlands. The planned rebirth will go under the name of New Stanton Park.

In this unexpectedly early rail freight move, GBRf reacted to a late notice demand from Ward and was asked to transport in excess of 1,400 tonnes of fragmented steel to Immingham Docks. Previous trials had been run at the site to prove the ability to transport bulks services. The operations followed on from significant infrastructure work at Stanton, as reported earlier.

GBRf took some obvious pride in answering the call, and in being part of the industrial revitalisation of the site and the community. “The acquisition of such a large site by Verdant JV will help breathe new life into the local area and we hope further opportunities for sustainable fr eight by rail”, said Carl Kent, who holds the commercial position of head of sales at GB Railfreight. “The commitment that Ward has shown to developing new rail freight has been impressive. We have worked with them to promptly respond to their demand. If all parties involved are committed and work collaboratively, there is no reason at all that new to rail freight activity from dormant freight estate need take many months or years to deliver.”

The site extends to almost 200 acres (around 80 hectares) and has laid dormant for over twelve years. The reuse of such heavily industrialised sites is not uncommon, but the extensive land remediation required often makes such activity uneconomic. However, the consortium involved here has the specialist skills in-house to make that viable. GBRf are eager operating partners, keen to grow their own portfolio, and habitually tout themselves as one of the fastest growing companies in the railway sector.