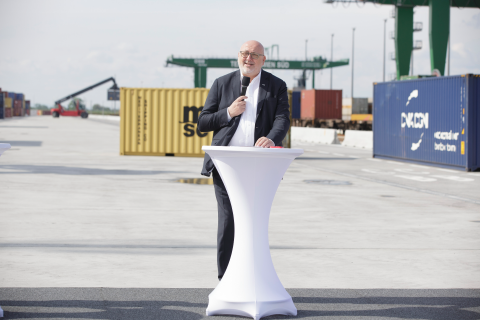 The Austrian railway company ÖBB has launched the second expansion phase of Vienna South Terminal. The handling capacity will be increased by around 50 per cent, which corresponds to an increase of 105,000 ITE (intermodal transport unit) per year. A third expansion phase is already on the agenda, which will raise the intermodal capacity of the terminal to 400,000 ITE.

Terminal Vienna South (Wien Süd) is an important junction for freight traffic in the eastern European. Since it went into operation at the end of 2016, the capacity utilisation was over 80 per cent – therefore the expansion of the terminal was the next logical step. “We invested around 19 million euros in the Vienna South Terminal, creating 12 additional jobs at the terminal. We are thus strengthening the economy in two ways – both for the shippers and for the construction industry, ”emphasised ÖBB’s CEO Andreas Matthä during the opening.

With the expansion, the capacoty of the terminal will be increased to 310,000 ITE – containers, semi-trailers, swap bodies etc. The essential aspects of the second expansion stage include a handling module for forklift operation with 2 x 700m loading tracks and two high-performance forklifts for ITE. As a result, ÖBB creates more storage space and more flexibility.

ÖBB wants to double its freight operations by 2040. In order to realise this goal, it is investing in the modernisation of Austria’s railway system, such as Vienna South Terminal. For every euro invested by ÖBB, two more euros roll out in domestic added value, according to the Austrian Institute of Economic Research.

“With our planned investments, we are making it possible to double our freight transport services by 2040,” emphasised Matthä. “I am convinced that there will be a renaissance in rail freight transport in the next few years, as every tonne on rails instead of on the road immediately saves CO2. This is the most effective way to decarbonise the transport sector as quickly as possible”, he added.