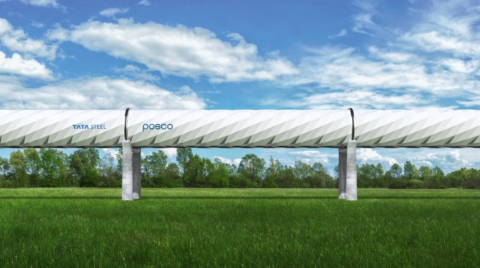 Hyperloop technology, which enables travel speeds of 1,200 km/h, holds massive potential for the railway industry. At the same time, there are areas of potential conflict between railways and hyperloop. In a recently published position paper, the Community of European Railway and Infrastructure Companies (CER) warns for “another cannibalisation of land-based modes of transport”, referring to the dominant role of road transport versus rail transport.

In a position paper published on 10 March 2021, the CER drew its first careful conclusions about the current developments in Europe. “At the moment, several institutional and corporate stakeholders of the European rail sector are directly or indirectly involved in ongoing hyperloop activities, it is time for CER to take a closer look at the topic and outline its initial hyperloop position”, it said.

According to the EU body, areas of potential conflict lie in the availability of funds for the railway industry, unfair competition and competition with other high-speed rail projects. Just as what happened to railway transport when road traffic came up in the second half of the 20th century, the hyperloop should not intervene with the current developments of traditional railways, the CER said. Nevertheless, traditional rail and hyperloop could complement each other and connect, as they have several characteristics in common.

Hyperloop projects have been developed in different parts of the world for the last ten years. Hyperloop includes a sealed tube with low air pressure through which pods travel almost free of air resistance or friction, powered and levitated by electromagnetic devices. This enables travelling at speeds up to 1,200 km/h. Currently, the fastest train travels at a speed of 431 km/h (Shanghai Transrapid).

Apart from its speed, hyperloop technology is also expected to become more energy efficient than existing rolling-stock for high-speed rail and ensure CO2 neutrality. Hyperloop is certainly not tailored to passenger traffic alone; there are also projects involving freight, such as the pilot between Rotterdam and Amsterdam for the transport of fruit, vegetables and flowers.

The CER is among others concerned about the availability of funds for the railway industry when a new player enters the market. At the European Commission, an internal task force has been set up to investigate the potential of the hyperloop technology, covering several Directorate-Generals. “These activities must not have a negative impact on the resources of ongoing regulatory projects for the rail sector”, said the CER.

“As a rule, hyperloop projects are currently based on private funding – similar to the situation of the railways in the 19th century. As soon as public support is deemed to be necessary, CER calls for a clear separation of funds to avoid that financial means dedicated for the rail sector are used to support proposals from hyperloop projects.”

A European institute involved in hyperloop activities is Shift2Rail, which is a public-private partnership. Organisations as these have been set up to work for and to cooperate with the rail sector. For the CER, it is important that activities of such institutions “shall not impede their mandates for the traditional railway industry, and no additional resources are provided”.

This is not the case, explains Shift2Rail. Activities of the companies related to hyperloop projects occur without diverging from its main focus on the Single European Railway Area (SERA), and hyperloop competitive development projects are currently only based on private funding, it points out.

A dedicated small Coordination and Support Action (0.25 million euros) was awarded in 2020 to set the basis for a safety and interoperable framework for new and non-traditional transport means, but, this was in the framework of interoperability with the traditional railway industry, Shift2Rail explained.

The setup of an interoperable framework is thus in progress. And this is important, says the CER. The railways are complying with very strict safety requirements. The European Commission recently said to assess the need for regulatory actions to ensure safety and security of new entrants and new technologies, such as hyperloop, in 2021.

However, it is important to ensure that there is a level playing field when new innovative parties enter the market, believes the CER. “We ask for a level playing field as the safety record of public transport must not be impaired by granting simpler market access to a new technological concept – in particular when partly sharing a common infrastructure”.

Interoperability and safety matters should be appropriately addressed, agrees Shift2Rail. “In this way, both transport means can deliver EU citizens and businesses seamless and efficient transportation services in line with EU policies.”

“In most cases, they are intended to operate in parallel to already existing high-speed rail infrastructure. But to avoid another cannibalisation of land-based modes of transport, we call for transparent and fair economic evaluations of potential hyperloop projects by respecting all expected social costs and benefits – particularly the accounting values of existing rail infrastructure assets, and their respective contributions to network effects”, the CER said.

Shift2Rail does not see interference in this regard, as it is also mandated to cover intermodal links with other modes, providing users with an integrated end-to-end solution for their rail travel and transport needs. “From a research and innovation perspective, we are looking for mutual benefits and synergies. In the end, the market will have to decide on the most appropriate transport mode for the different use cases to better serve citizens and businesses.

“It is a major opportunity to work together with the promoters of the different hyperloop initiatives, which can contribute to accelerate ideas and cross-sector innovation”, it continues. “We consider that new technologies, such as hyperloop, may create opportunities for and synergies with the rail industry, including railway setting the ground for a future regulatory framework for such technologies.”

In realising this intermodal transport chain, interoperability is all the more important, the CER suggests. “Technical and operational regulation, as well as standardisation, is key in both cases to benefit from economies-of-scale, avoid isolated operations and/or costly retroactive harmonisation efforts. Both modes of transport could benefit from proactive cooperation and standardisation. However, a balance must be found between establishing the necessary European regulatory framework on the one hand and encouraging innovation on the other hand.”

Not the right moment

The European Commission expects the emergence and wider use of hyperloop for passenger and freight services by the end of this decade. It is important to note that the CER added in its position paper that “the new technology is still not ready for deployment as it is not yet mature enough.

“In its current state of maturity, we believe it is not the opportune moment to take a pro-active role towards regulatory hyperloop provisions. In 2023, CER and its members will therefore reopen the internal discussions on the hyperloop concept to reflect again on this topic and to adjust the initial position by taking into account the updated knowledge available by then.”