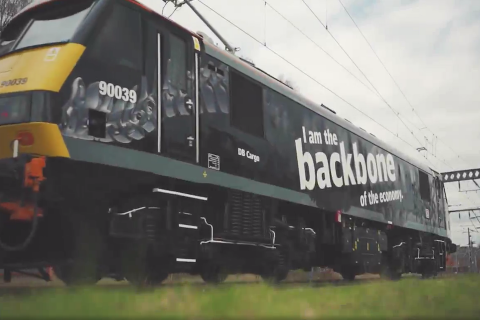 I am the Backbone, says DB Cargo

Big red goes bold black to state its support of the UK economy. A brand new livery, familiar already on Continental Europe, has come to the UK. In a personal letter from chief executive Andrea Rossi, the Doncaster headquartered company has officially launched its UK version of their Europe-wide campaign, “I am the Backbone”. One of the company’s fleet of former passenger express electric locomotives has been outshopped in a black livery with striking graphics. The loco has already been seen in action around the county in the most unsecret unveiling trials in the industry.

DB Cargo UK has not exactly kept 90039 under wraps and out of the public gaze. The freight operator has made no secret of its bold new livery for this example of its class 90 electric locomotive fleet. The loco is the most visible part of the company’s “I Am The Backbone” campaign, launched to raise awareness of the value of rail freight to the UK economy. The campaign is being rolled out to coincide with the industry backed “The role and value of rail freight in the UK”, complied by analysts Deloitte.

In a personal letter to the industry, delivered to RailFreight.com, Andrea Rossi, the chief executive of DB Cargo UK, said he wanted to share the details and the launch of the campaign. “DB Cargo UK’s new “I Am The Backbone” campaign has been launched to draw attention to a new report, based on independent research by Deloitte, showing that rail freight delivers 2.5billion GBP (2.75billion euros) in economic and social benefits to the UK annually, with the north of England, Wales and Scotland among areas benefitting the most”, he said.

As already reported in RailFreight.com, Deloitte have developed a new framework which enables the value of different types of freight paths to be calculated. The model shows that each rail freight path on the network has an economic value of up to 1.5 million GBP (1.65 million euros) per year. It highlights the benefits that could be realised by transporting more goods by rail. “In my opinion”, said Rossi; “following the essential role rail freight has played during the pandemic to keep Britain running, there has never been a more opportune time to turn up the volume on the benefits of rail over road and how we are working to decarbonise the railway and help the Government meet its net-zero carbon reduction targets.”

Met with much enthusiasm from the industry and the public at large, locomotive number 90038 has been finished in an all-black livery, with a spine graphic and decals featuring the strapline “I am the Backbone of the economy”. Rossi was proud to officially unveil the locomotive. “To this end, we have commissioned a newly-liveried Class 90 locomotive to tour the mainline network bearing the message”, he said. “The new locomotive is already operating on key routes across the rail network and a special promotional video has been launched across all our social media channels.”

Similar campaigns have been launched across Europe. However the UK version strikes a chord with the governmental imperatives to make industry carbon-free by 2050. It also highlights the UK Prime Minister Boris Johnson’s stated desire to “build back better” as a remedy to the economic setbacks of the pandemic.