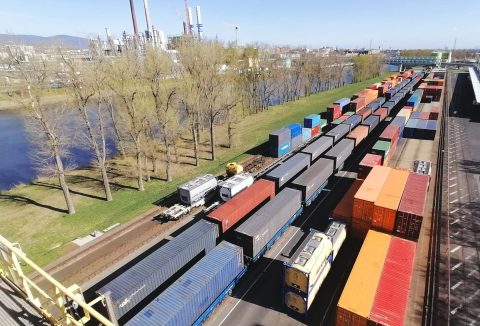 Since the start of April, the Frankfurt region of Germany is connected to the New Silk Road. A train from the Chinese provincial capital Jinan arrived for the first time at the Contargo container terminal in the Frankfurt-Höchst industrial park in early April. Many more trains from China will arrive in Frankfurt in the coming weeks, according to the logistics company.

The containers take 18 to 20 days to arrive by rail from Jinan to Frankfurt am Main. The first train of rail operator FELB arrived punctually on 3 April at the Contargo terminal in Frankfurt. It delivered 44 containers (40 ft) of consumer goods from China. Contargo took care of the transshipment and further transport to the customer.

“Finally, the Rhine-Main region is connected to the New Silk Road”, says Kawus Khederzadeh, managing director at Contargo Industriepark Frankfurt-Höchst. “Many ships from the Far East are overbooked and inland vessels have to wait a long time in the western seaports. The rates for sea freight have increased enormously and containers are hardly available in the seaports.

“A number of our customers are therefore looking for an alternative”, he argues. “This is becoming increasingly urgent, as the traffic jam on the Suez Canal will put additional pressure on port installations and traffic infrastructure in the coming weeks. A good time to switch to rail!”

The trains from Jinan will run two to three times per month. However, this is not the only departure point for the trains to Frankfurt. Trains from different regions of China are expected in the coming weeks, Contargo added.

About the makeover of FELB, and its 5-year plan