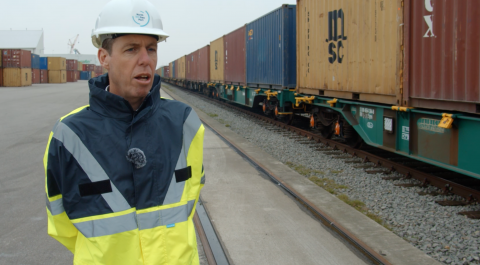 In RailFreight Live this week: the Belgium edition

Ever since MSC has announced to open a depot at North Sea Port, the phone has been ringing non-stop at Vlaeynatie, the company that is to facilitate the depot at Terneuzen. Other shipping companies are now asking us if we are ready to come up with similar arrangements for them. We are ready. We have all the means to make rail more favourable”, said Paul van den Broech, CEO of Vlaeynatie.

Last week, our team visited North Sea Port to hear more about its plans to increase its rail freight share, to make rail more efficient and to gain importance on the international corridors. We saw the huge amounts of sugar loaded on the trains, a product that logistics company Vlaeynatie specialises in. The report will be broadcast in RailFreight Live on Friday 19 March.

This week in the show

This week, the show is a Belgium edition. Apart from North Sea Port, we will also discuss the measures announced by the transport minister this week. The rail freight sector is to be supported financially with a significant reduction in track access charges. We will discuss this with:

RailFreight Live is the weekly broadcast of RailFreight.com in which the latest news is discussed with experts from the industry. It is broadcasted at 1pm CET on our YouTube Channel, which will also be available on the website of RailFreight.com during the broadcast. It can be found on the Youtube Channel any time afterwards under videos.