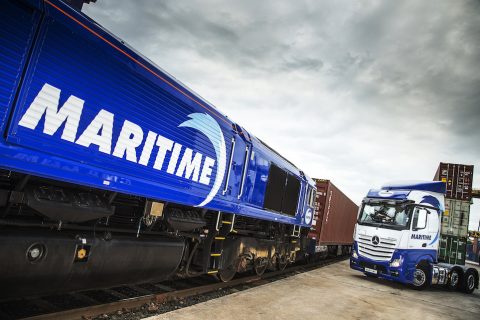 The UK’s busiest intermodal port, Felixstowe, has signed a deal for another express intermodal service – the second new agreement in seven days. Hutchison Ports, the owners of the East of England facility, announced this morning a further new flow, connecting the port with East Midlands Gateway (EMG), the inland distribution hub adjacent to the airport serving the heart of England.
The news comes less than two weeks after both locations won freeport status in the round of competitive bidding announced by the UK chancellor in his budget speech. The flow will be managed by Maritime Transport and operated by DB Cargo UK.

Felixstowe has been rapidly growing its rail freight operations in the past two years, on the back of capacity enhancements within the port and on the branch line connecting it to the national network. The port has been criticised for congestion around its truck-based operations, but rail freight has grown in size and reliability.

A second new rail freight service in seven days will be welcomed by the chancellor of the exchequer in the UK, Rishi Sunak. It represents a vindication of the freeport programme he announced in his budget speech. Not only does it vindicate the economic growth potential of the freeport programme, it also helps address the government’s commitment to greening the economy, and shifting logistics activity to rail where possible. Only last week, the port announced a new connection with Wakefield in West Yorkshire, operated by GB Railfreight.

“The ability to move goods to or from ports by rail is an important differentiator for traders”, said Chris Lewis, the chief executive officer at Felixstowe. “This second new rail service in seven days further extends the Port of Felixstowe’s lead in this field. Regular services are important in growing the share of traffic choosing more sustainable intermodal options. This third daily service to East Midlands Gateway (EMG) boosts choice, reliability and frequency for shippers in the Midlands and helps reduce further the carbon emissions of businesses in the region that use the Port of Felixstowe as the gateway to overseas markets.”

While best known for their extensive road operations, Maritime Transport is a familiar sight on the UK rail network – with a fleet of liveried locomotives at their disposal, in a branding agreement with DB Cargo UK. John Bailey, their managing director for intermodal and terminals said the increased capacity and logistics efficiency would actually reduce the need for long distance heavy goods vehicles – an issue that has affected the industry in the UK for some time. He says it is part of their overall strategy.

“Our latest intermodal service has been introduced following high demand at Felixstowe and EMG, and really underpins both Maritime’s and DB Cargo UK’s drive to offer more reliability and greater choice to the market.”

Maritime Transport, who operate a 17-acre (7-hectare) intermodal rail freight terminal at EMG, say they provide access to the UK’s major ports, operate 24/7 and are able to accommodate up to sixteen 775m freight trains per day. Striking a chord with Bailey, the chief executive of DB Cargo UK, Andrea Rossi, said the status quo of the industry was always under challenge from new innovations.

“This new service, which once again brings together two of the largest and most successful freight companies in the UK, is a testament to the successful partnership we have forged with Maritime, and reinforces our commitment to keeping the nation on track during these challenging times. We look forward to maintaining our close alliance as the industry focuses on modal shift, while delivering sustainable solutions and innovation to our customers.”

Felixstowe has three dedicated rail terminals and an extensive range of inland destinations served across the whole of Great Britain. This new rail freight service will be Maritime’s fifth connection with the Port of Felixstowe and will run Tuesday to Saturday.