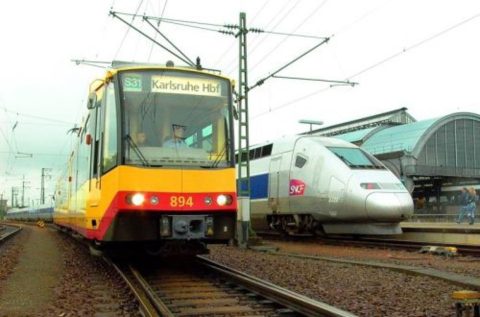 In the region of Karlsruhe, a joint project called LogiKTram aims to transform the last mile of combined transport. In particular, the project wants to develop a logistics concept where transportation of goods from rail terminals to their final destination will take place on trams or light rail vehicles, using existing urban tram and rail infrastructure.

The LogiKTram project includes various partners with AVG (Albtal-Verkehrs-Gesellschaft), Karlsruhe’s Institute of Technology (KIT), and FZI Research Centre for Information Technology standing out from the rest. They aim to shift more traffic from road to rail by simply transforming last-mile transportation. Consequently, they are working on the concept of ‘freight trams’, which becomes feasible due to the ‘Karlsruhe Model’ of dual-rail infrastructure system.

The project started on March 1 and will last for three years. It will receive a funding of 2,75 million euros from the German Ministry for Economic Affairs and Energy to complete its initial objectives. Moreover, LogiKTram is part of the umbrella initiative regioKArgo, which investigates and implements new types of cargo and delivery traffic in Karlsruhe and the surrounding region.

Putting rail freight in the centre of short and medium distance transportation constitutes the joint project’s number one goal. Rail should not be limited to routes between seaports and freight terminals but should also expand to urban operations. According to LogiKTram, shifting traffic to rail is not enough since last-mile deliveries should also be emission-free. Thus, the project will attempt to create a new concept accompanied by an information and communication technology platform to encourage similar future initiatives.

Tests concerning the new concept’s functionality are already taking place. AVG has provided one of its vehicles for this purpose, which bears particular adaptations to fulfil transporting goods’ requirements. Following the tests, the team will try to establish an operational line in the region that will transport products in practice. Furthermore, testing will also clarify whether the project should use older retrofitted vehicles or build new ones.

LogiKTram did not choose Karlsruhe to develop its project by accident. The specific region has been using the dual rail system, with combined tram and rail routes, for almost thirty years now. “The existing infrastructure of the ‘Karlsruhe Model’ offers ideal conditions for developing new forms of freight transport and testing them in practice”, said Ascan Egerer, Technical Director of AVG.

People and goods in one train

The project will try to avoid using different vehicles for cargo and passenger traffic. Subsequently, it will try to create a concept where travellers and products will board a single tram. To succeed in this, the development team needs to redesign the wagons’ interior and create dedicated cargo spaces.

On top of that, some additional upgrades must take place. For instance, calculating precisely the loading and unloading processes or the positioning of lanes at the stations is crucial for the sharp transportation of containers and seamless passenger traffic flow. To check this objective’s feasibility, KIT builds a simulation environment in Karlsruhe, based on the mobiTopp, a transport demand modelling framework.