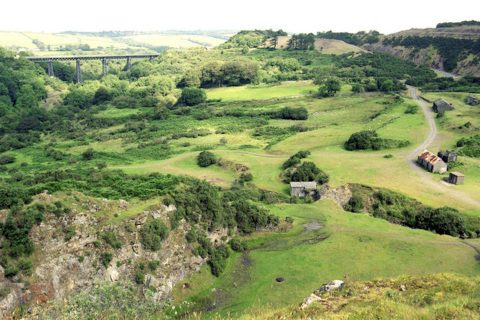 Devon development is opportunity for freight and HS2

A mothballed quarry, potentially supplying the HS2 project, could be the surprise beneficiary of a development promoted by the UK government to reverse an overzealous rationalisation programme of the 1960s and 1970s. Forthcoming reinstatement of regular passenger services between the south west city of Exeter and the town of Okehampton, on the edge of Dartmoor in Devon, has prompted speculation that Meldon Quarry, a short distance west of the intended terminus, could be reactivated, and light goods could be carried too.

Slab track panels for the HS2 project are to be manufactured by a consortium of specialist PORR UK and Aggregate Industries, the latter of whom are the owners of the mothballed Meldon Quarry. It is expected that Aggregate Industries will supply raw materials to the new purpose built manufacturing facility in Shepton Mallet, in the neighbouring county of Dorset. Capacity improvements for the reinstated Okehampton passenger service could well facilitate reintroduced aggregates traffic as well.

The whole reopening project is part of the UK government programme, known as ‘Reversing Beeching’. Well known in the UK, industrialist Richard Beeching was consulted by the government to arrest the decline of the then nationalised British Railways. His wide-ranging ‘Beeching Axe’ fell on about half the system – including much of the West of England network.

Okehampton has, in principle, remained on the passenger network, but the service is limited to a few weekend services and charter traffic. The line has been almost exclusively bulk aggregates traffic, until the quarry was mothballed. However, that is not the only freight potential for the line.

From Exeter, the Okehampton line runs parallel to a longer branch, running north to Barnstaple. That route, locally known as the Tarka Line, did have an element of freight traffic in the past as well, and both lines lend themselves to the possibility of light logistics traffic. While capacity will still be limited on both lines, the prospect exists for light goods, conveyed on scheduled passenger services.

The line was once part of a through route between Exeter and Plymouth, via Tavistock. All that remains now is a branch line at either end – the Plymouth end terminating at Gunnislake. More ambitious plans call for the entire link to be reinstated, giving the West of England a resilient mixed traffic alternative to the often disrupted coastal route via the famous Dawlish sea wall.

Although the 40 million pound project (45 million euros) was officially announced in the UK budget speech last week, work has already been underway for some time. Local sources say that around 7500 concrete sleepers and considerable quantities of rail have already been delivered to Okehampton – prompting observations that freight – albeit temporarily – has already returned to the line.

The line is in the hands of Aggregate Industries, and formal signing over to Network Rail is expected later this month. Work may well start as early as April to increase capacity and provide pathways for service every other hour to Exeter. These pathways are already in the working timetable from May, but likely at first to be used for training. It is hoped locally that regular services can start as early as this Summer, with an increase in frequency to an hourly service in December. Perhaps by then, bulk aggregates will be joining the improved line too. Innovative developments like this will be on the agenda at the forthcoming RailTech Europe at the end of this month.