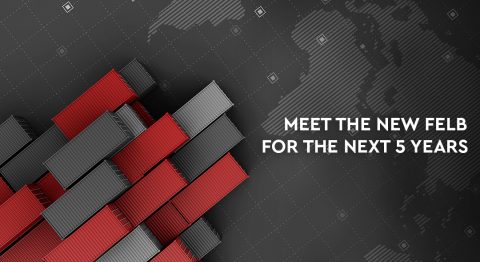 About the makeover of FELB, and its 5-year plan

Since 2007 the Far East Land Bridge has been connecting Europe, China and South Korea by rail. 2020 has been a year for profound changes, both for its corporate profile and its operations on the New Silk Road. The refreshed company is looking at 2021 and the following years with appetite for developments.

It is not that the company did not develop last year, CEO Liliana Krutonog points out. Right away, she shows some impressive figures: a 42 per cent increase in the cargo volumes by TEUs, with a total of 105,000 TEUs. But the company thinks big. Over the next five years, it wants to establish its own equipment, expand its container park, and add several sets of 1,435 wagons to its fleet to optimise its services.

But first that corporate identity, which saw a major change in 2020. “We attempted to bring FELB closer to its group colours (JSC Russian Railways ). Subsequently, we re-branded and updated our logotype. We launched a fresh look for FELB in February 2021 and created a new website. I believe that we did our best and achieved the aimed goal, and the result is well-intentioned”, says Krutonog.

The change of face did not come out of nowhere. Last year, FELB acquired a new main owner – RZD Business Asset. But the makeover has impacted the performance of the company too, the female leader says. The company increased its rail share and reduced CO2 emissions by using more innovative and sustainable products. “We believe that it is our role and responsibility to lead the change towards environment-friendly and more sustainable choices”, said Krutonog.

The train departed from Nanchang Central Station in China on 4 June, arriving in Paris twenty days later. The cargo was entirely destined for hospitals and local authorities and was distributed in the Ile-de-France region and the Auvergne-Rhône Alpes region in France. FELb did this in cooperation with Russian Railways Logistics, SNCF Forwardis, Cosco group and UTLC ERA.

For the future, FELB has some interesting plans. For example, the company wants to establish some new platforms in China’s Shangdong province, specifically in Jinan, Qingdao, and Linyi. The region of Jinhua is also of interest, and FELB runs this project together with SNFC. “Besides, FELB will also concentrate on implementing modern IT technologies. We have already started with it. Right now, we are testing our first smart container”, says Krutonog.

“In terms of routes, we will concentrate more on the Zabaikalsk route since our mother company owns a terminal here. The Grodekovo border-crossing between China and Russia is also an excellent alternative that the company will pay attention to. Infrastructure has not yet been modernised there, but in the next one-two years, this border point will become more and more attractive”.

In Europe, the company sees a lot of potential in Eastern Europe, as increased demand asks for alternative entry gates. Big players in this region will have a central role in this transition”, the CEO expects, and the company has already signed several strategic agreements in anticipation. For example with CD Cargo Logistics, a subsidiary company of Czech national railways.

Growing volumes will force companies to look for alternative routes, and as such, FELB likes to be one step ahead. That is why it operates through less congested border-crossings like Zabaikalsk or Grodekovo. Similarly, the company is already operating trains through Slawkow, which is now growing in importance as an alternative gateway to Europe.