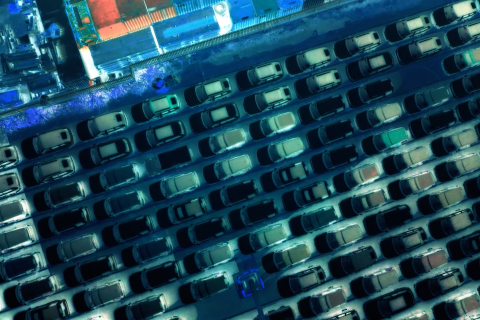 Southampton’s position as Britain’s premier automotive port has been strengthened by a new rail service, backed by a 300,000 pound investment (335,000 euros). The operators of the port have collaborated with rail operators and car manufacturers to provide a new rail-based export flow. Transfer of up to 800 units from BMW’s Mini car plant at Oxford will be facilitated by the new service.

Associated British Ports (ABP) has invested in a new rail-based automotive export service at the Port of Southampton. This is the first automotive service to operate in the Western Docks of the port. ABP is working to expand its rail facilities at the port to include both the Eastern and Western Dock locations. ABP, who operate a network of twenty-one ports around Britain, are also the owners of the busy rail freight terminal at Hams Hall in the Midlands.

For most ports, the prospect of moving 800 finished automotive units a week would be a major traffic jam. However, Southampton’s automotive handling already runs to around 900,000 vehicles a year, so the port operators can take this new flow in their stride. With rail freight operator DB Cargo UK delivering BMW Minis by the trainload, it should be nothing more than a small adventure for all concerned.

Associated British Ports already have a strong commitment to moving goods through Southampton. Network Rail, the rail infrastructure manager for the UK, is also supporting the expansion. Work is currently underway to modernise the permanent way and improve access and capacity. For their part, ABP say this new service offers a greener and safer delivery, keeping lorries off the road.

As with all successful logistics operations, there are a whole team of players involved. Working together with customers DB Cargo UK, who run the train service, and Southampton Cargo Handling (SCH) who discharge the vehicles, ABP say they’re delighted to support the national automotive supply chain in Southampton. Alastair Welch, the ABP director at the port, was looking forward to a lasting relationship between all concerned, and collaborating on this new automotive service to the Western Docks for BMW. “As the UK’s number one export port for vehicles, we look forward to continuing to expand Southampton’s automotive offer by rail even further in the future.”

DB Cargo UK already use their own fleet of specialised wagons, and this flow increases utilisation of resources. “We currently operate finished vehicle rail movements throughout the UK, as well as international services for automotive components”, said Roger Neary, DB Cargo UK’s head of sales. “We are delighted to be working with ABP and BMW to establish this new service into Southampton.”

Southampton is growing even more important to UK trade. With long-term concerns over congestion at the so-called Channel ports, Southampton’s geographic position is proving attractive. Associated British Ports operate 21 UK ports, 16 of which are rail connected, allowing the Compnay to work with all of the UK’s major rail freight operators.