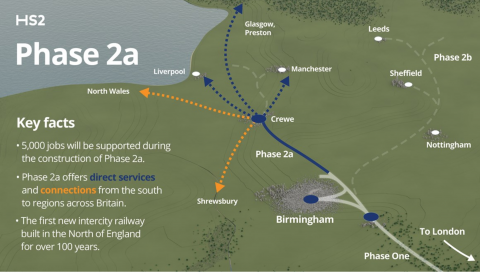 The UK Parliament has given the go-ahead to the next phases of Britain’s high-speed railway network, HS2. This will ensure the building of Phase 2A north from the West Midlands to Crewe. Here, it will connect with the West Coast Main Line and trigger capacity improvements. This was announced today, Thursday 11 February.

Parliament’s approval for this new phase of HS2 plugs the line into one of the country’s principal rail hubs in Crewe. It also means the 58km (36miles) route will be built earlier than originally planned: the opening is now planned to coincide with Phase One between London and the West Midlands.

HS2 is a planned high-speed railway system in the UK. The first phase, connecting London and Birmingham, is under construction and planned to be completed in 2029. It is the second high-speed line in the country, which is expected to benefit rail freight too as it frees up capacity on the main network.

Prime Minister, Boris Johnson said: “Today is a landmark moment in our infrastructure revolution. HS2 is the most significant expansion to our national railways in a generation – transforming connectivity between our towns and cities and vastly increasing the capacity of our rail network. By proceeding full steam ahead, we are delivering on our commitment to unite and level up the country.

Once operational, high-speed services operating between London, Birmingham and Crewe will use the newly-constructed high speed line – delivering extra capacity, improved reliability and reducing journey times. These services will then join the existing network to create direct services to places including Liverpool, Manchester, Preston, Carlisle and Glasgow. Crewe is also the station for connections to North Wales and Shrewsbury.