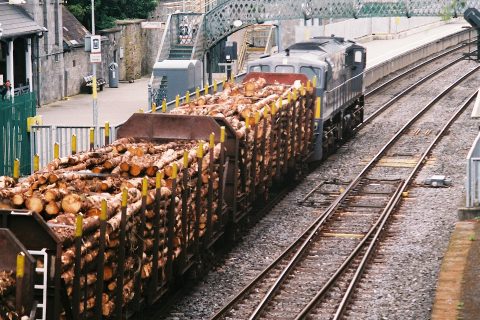 Industry, community and political voices have refuted a report that casts doubt on completing a rebirth of rail connections on Ireland’s West Coast. They say the report has been far too pessimistic in its assessment of completing a 60km gap. Freight could play a significant role in making the line viable, say supporters, and the report has failed to take account of the full economic potential.

The case for reopening of the Western Rail Corridor is actually very good say supporters, despite a report which pours cold water on the idea of an Atlantic coast route, connecting communities from north to south with a new mixed use railway. The report by Ernst and Young (EY) is a financial and economic appraisal of completing a series of improvements and reopening on the west coast of Ireland, primarily driven by passenger transport initiatives.

Odds stacked against viability of the project

Supporters have said that the reopening costs have been significantly over stated in the EY report. Tim Casterton, a UK-based rail professional with extensive experience of the Irish scene, says there is an over-costing of nearly 169 million euros. “That is an estimated error of 125 per cent more than 130 million euros suggested cost once infrastructure and equipment that is not required are removed from the EY Report”, he says. “Items such as a new train fleet which is not required, double tracking on the Dublin – Galway main line that is a separate railway capacity enhancement project, and more passing places than are required is also over specified in the Report.”

The subject of the report, the 60km railway gap, between Athenry in the south and Claremorris in the north, is the last link in a complete ‘Western Rail Corridor’ between the towns of Sligo and Galway in the north, and the international ports of Cork and Rosslare in the south of Ireland. Of note, both ports are experiencing a significant upswing in traffic, mainly as a result of European traffic, keen to avoid the post-Brexit logistics overheads of taking goods via the UK.

New freight bids could use the corridor

Mixed traffic would add viability to the project argue supporters. They say the EY Report makes little mention of existing freight services that travel between the northern county of Mayo (Westport and Ballina) and Waterford in the south, even though they take a significant detour because of the missing link. “The pulpwood trains operated by Iarnród Éireann (IÉ) for Coillte – the forestry company – operate on average three times per week at present”, says Casterton. “That is 150 trains in each direction to and from Waterford which at present run via Kildare where a reversal is required that causes serious congestion on the Dublin to Cork main line. There are presently active bids from both International Warehousing & Transport (IWT) and XPO Logistics to commence operation of intermodal services between Ballina and Waterford Belview Port.”

Also, according to pro-Corridor sources, the EY report fails to recognise that Waterford already has a rail freight operation – a weekly steel carrying train that operates from the port. “The re-opening of the Western Rail Corridor remains a key priority”, said Irish politician Rose Conway-Walsh, who represents the Mayo constituency. “The failure of the EY Report to evaluate the strategic importance and the wider economic benefits of the WRC is alarming.  This combined with numerous technical inaccuracies simply means that to use this report for political decision making would be reckless.”

The present route for all 900 freight trains that operate annually between Mayo and either Waterford or Dublin utilises the single track railway between Athlone and Portarlington”, says Casterton. “This stretch of line is virtually operating to capacity, with all passenger trains using the track as well. To operate any more services over this line will require considerable expenditure on a dynamic passing loop, however opening the WRC would reduce freight services on the line releasing train paths for other passenger or freight trains on the Dublin axis.” He says the report dramatically underestimates the economic benefits the WRC will bring to the West of Ireland. “It fails to note that IWT and XPO are currently in discussions with IÉ to operate new Ballina-Waterford services as soon as possible to further support Mayo industry.”

The most damning response to the report comes from Dr John Bradley, who is well known in Ireland as an established research professor at the Economic and Social Research Institute (ESRI) in Dublin. In a personal capacity he wrote for local media sources, in a rebuttal which was headlined with an unequivocal rebuttal. “The Government commissioned report on the Western Rail Corridor is truly shocking and riddled with negligence, summarised The Mayo News. “Far from quibbling with its parts, I reject the entire basis upon which the report was commissioned and executed”, says Dr Bradley. “Buried amid the scattershot and confusing detail of the analysis are three crucial issues. The front-loaded capital costs; the ticket and freight revenue forecasts; the treatment of the.wider benefits of the WRC in the context of regional development strategy.”

Bradley also mentions that the Western Rail Corridor was quietly dropped from the Europe-wide TEN-T network ambitions. Given the unexpected level of Brexit-related new traffic, and the inauguration of European Year of Rail,  perhaps a rather louder call may be made for reinstatement to that programme.