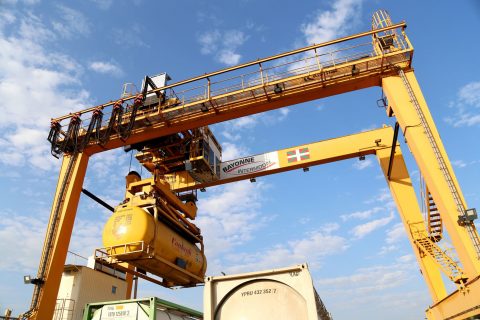 Kombiverkehr has relocated its trains on the Cologne – Irún route to Duisburg. From last weekend onwards, trains of this service depart and arrive at the DUSS terminal in Duisburg-Ruhrort Hafen. The switch to Duisburg allows for an array of new transport alternatives for shipments from Spain and southern France, the company points out.

Kombiverkehr direct train service from Germany to Spain runs between Madrid and Irún every working day. There are satellite services from Madrid to Murcia, San Roque, Sevilla, Valencia and Zaragoza.

“By switching from Köln-Eifeltor to the Duisburg-Ruhrort Hafen DUSS terminal, we at Kombiverkehr are once again playing our trump card of being able to offer efficient connections of direct services to a large number of other terminals and economic centres in Germany and throughout Europe via major hubs in our European network.

With the switch to Duisburg, our trains serving Spain are now linked to one of the five most important gateway terminals in our Kombiverkehr intermodal system”, says Alexander Ochs, Managing Director of Kombiverkehr KG

According to him, trains from France and Spain could now reach Poland, the Czech Republic, Austria, Scandinavia or Benelux in the one-stop-shop process. This measure opens up the possibility of onward transport by rail towards the Iberian peninsular for cargo from the Far East as well.

“Not only that, but in domestic transport logistics companies can enjoy the benefits of a new direct link to Leipzig and a high frequency of onward services to Lübeck on the Baltic Sea, the only product of its kind on the market, with eleven trains now departing Duisburg each week,” adds Peter Dannewitz, Head of Sales.

Containers and swap bodies with a C45 or C364 profile can now be carried on the Atlantic route. Customers with P400 trailers on Spain – Germany routes will continue to use the existing service between Barcelona Morrot and the CT terminal in Ludwigshafen for the eco-friendly transport of their goods and merchandise. Kombiverkehr offers this service three times a week in each direction.

Working in collaboration with Combiberia and Novatrans, the Frankfurt-based operator now runs 26 direct trains a week in each direction between Germany and Spain, the Iberian peninsula and the border region around Bayonne. The Atlantic and Mediterranean routes link the Spanish terminals in Madrid, Granollers, Barcelona and Constanti, near Tarragona, with Ludwigshafen and (in future) Duisburg by direct train.