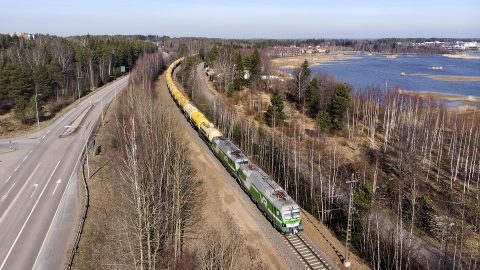 Nurminen Logistics announced three new services between Helsinki and the Chinese cities of Suzhou, Ningbo and Jinan. The connections will have the form of complete roundtrips from China to Europe and back to China. The first train from Jinan already departed on 19 January, while the other two services start in February. “All trains are already fully booked for a long time”, says Marjut Linnajärvi, Sales Director at Nurminen Logistics.

The logistics company saw its container train traffic volumes tripling during 2020. This significant growth, combined with the capacity scarcity due to Covid-19 and the lack of containers in China’s maritime traffic led Nurminen to open three new train routes to meet customers’ increased demand.

Since the launching of the first regular line between Finland and China with the Hefei route in 2018, Nurminen Logistics has established another weekly service from Chongqing that extends to the northern Norwegian port of Narvik, providing opportunities for transcontinental transport towards the American continent. This connection started operating a few months ago in fall 2020.

The three new connections aim to grow interconnectivity between the East and the West and provide frequent and reliable transport solutions. Furthermore, the company plans to open more routes in the future, an indication of the potential that transportation between China and Scandinavia has. “Regular departures allow our customers to reduce storage costs and increase flexibility according to their needs. Besides, the train is the most environmentally friendly mode of transport ” says Linnajärvi.

Finland is gradually becoming a competitive player in Eurasian transportation, and the exclusive and frequent connections it establishes with China work as proof. Transport of frozen or fresh products like salmon is the key driver for growth.

With Russia as a neighbour, the Scandinavian country has direct access to the Trans-Siberian route. Consequently, it can function as a gateway for all Nordic countries that want to enter the New Silk Road. Nordic countries also have excellent interconnectivity between them since they operate on a single and compatible rail system that allows trains to reach various destinations, such as Narvik mentioned above.

Functioning as an alternative gateway to the broader Northern Europe and Baltic countries could also be one of Finland’s features. The Port of Helsinki can offer quick short-sea connections to Tallinn, Riga, as well as Kaliningrad and Gdansk. Subsequently, westbound cargo entering the country could then transport to one of the hubs mentioned before and get distributed in the European hinterland.

The potential is, thus, enormous at the moment. If we only consider the three extra connections announced and those about to come, it becomes clear that rail freight transport has a lot to expect from Finland in the coming period.