Modern terminals under construction in key logistics places are in the news this month. Where Calais is currently witnessing the rise of a modern terminal operating with CargoBeamer technology, another state-of-the-art facility is built by East West Gate on the Hungarian-Ukrainian border. Both facilities promise to play a key role in the intermodal transport. The developments are the theme of this week’s RailFreight Live.

RailFreight Live is the weekly broadcast of RailFreight.com in which the latest news is discussed with experts from the industry. This time it is broadcasted at 2pm CET on our YouTube Channel, which will also be available on the website of RailFreight.com during the broadcast. It can be found on the Youtube Channel any time afterwards under videos.

In this week’s show

The guest of this week’s show are:

Moreover, RailFreight Live reporter Nikos Papatolios will update you about the latest developments on the Great Belt Bridge in Denmark. He has taken a closer look at the situation and spoke to the companies involved. He will share his latest finding. 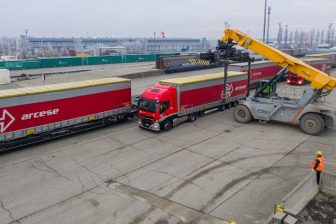