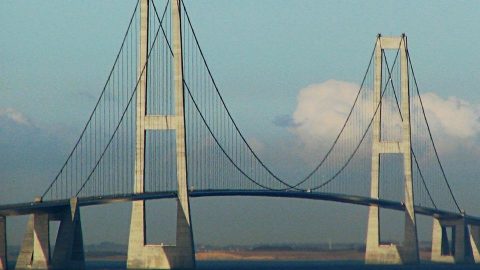 The Great Belt Bridge in Denmark has been closed for pocketwagons with semi-trailers. The reason is an almost accident, where a trailer threatened to drop off a moving train as it was not properly attached. A fatal accident took place on the same bridge two years ago, when parts of a semi-trailer came loose and hit a passenger train. The bridge is closed at least until 27 January 2021. The closure applies to all types of trailers regardless of the connection type.

The accident was avoided as the moving trailer was keenly observed by a bypassing person, media reports. The intermodal train running from Høje-Taastrup to Fredericia was stopped and inspected. The trailer then appeared not to be attached to the wagon’s locking bolster. The Danish Transport, Building and Housing Authority banned the transport of semi-trailers in pocket wagons across the Great Belt until at least 27 January, but this could be extended.

Although some companies have suspended operations on this route for the time being, intermodal traffic to and from Sweden is not completely stranded, as Stena Line is offering to take complete trains across the waters. To be precise, it takes up trains on its service between Trelleborg (Sweden) and Rostock (Germany), a first-time experience for the company as well.

“Time is money, and we had to react quickly when the news of the bridge closure came. We have 1 kilometer of track capacity each on both ferries, the MS Mecklenbrug-Vorpommern and the MS Skåne, and travel back and forth up to 40 times a week. In this way, we can make a major contribution to ensuring that freight trains can run across the entire continent without stopping for reloading, even if the overland route fails”, says Katrin Verner, Freight Commercial Manager at Stena Line.

The scene of a shifting semi-trailer must have been an awful deja vu for the Danish authorities, as it is a little more than two years ago that a similar situation led to eight fatalities among passengers in a train on the bridge. The passenger train was hit by parts of the roof of truck trailers on a bypassing freight train, which passed on the higher section of the bridge.

The safety of the use of pocketwagons cannot be guaranteed, although they are permitted in the transport by rail, was the conclusion of the Accident Investigation Board of the Danish Transport Authority (DTA), a few days after the accident.

A thorough investigation followed, and on 26 April, an action plan was launched which contains short-term risk mitigation measures addressed to railway undertakings, wagonkeepers, ECM’s and terminals. Most importantly, the placing of a semitrailer onto a pocketwagon must be supervised by a dedicated staff member. This person assures that the kingpin is placed into the guiding ring of the hitch and that there are no gaps between the hitch top plate and the semi-trailer plate.

After the placing of the semitrailer, procedures must be followed to check if this is done correctly, which is also done before the departure of the train. Also before the placement there are several actions that must be followed, in addition to maintenance of the hitch and in particular of the mechanism to lock the kingpin. The action plan dictates which parties are responsible for these procedures. It also states that the measures must be integrated in the safety management systems, contracts and instructions of these parties.

It is not yet certain how it is possible that an intermodal train in the same place was able to depart with a semi-trailer not properly attached. The Danish Transport Minister has asked for follow-up steps.