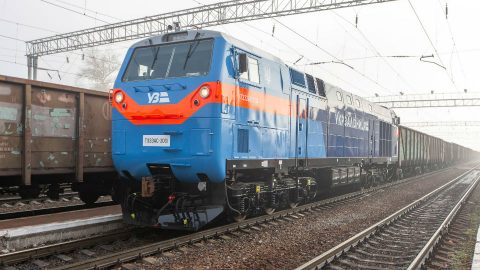 The numbers confirm Ukraine’s upward trajectory for 2020. The Eastern-European country managed to be at the forefront of many significant developments regarding new connections with China and connectivity with the rest of Europe. Gradually, Ukraine manages to acquire a central role in Eurasian rail transport, despite being behind compared to other destinations.

In an exclusive interview with RailFreight.com, Timofey Murakhovsky from Ukrainian Railway mentioned that container train transportation in the country is steadily growing every year with almost up to 20 per cent. This growth takes place despite the challenging conditions in the country after several years of sociopolitical unrest.

Due to a war outbreak in 2014, Ukraine struggled to maintain its status and remain active and trusted in the markets. Nevertheless, a few years later, it is getting back on tracks and exploring its potential to grow more. As Murakhovsky commented, Ukraine still has much space for improvements, but at the same time it has a lot to offer in Eurasian rail haulage. For instance, it can function both as an end destination and a transit country in the New Silk Road.

Currently, the missing point in Ukraine’s endeavour for growth is state support. Even though numbers are increasing and rail freight is becoming more popular in the country, the Ukrainian government and ministry of infrastructure need to provide consistent support schemes. This should provide the required capital to attract foreign investors.

Considering the lack of governmental support and the problematic previous years, Ukraine already seems to take critical steps forward. Since last summer the country is officially a destination of the New Silk Road. On 8 June the first direct train arrived at Kiyv from Yantai. Ukrainian authorities festively welcomed this new link and underlined its importance and possibilities to expand and become regular.

Indeed, after two more trains arrived in Kiyv from Wuhan (July 2020) and Xi’an (August 2020). Concerning the service from Wuhan, it is the first regular rail service from China to Ukraine that runs weekly and has the potential to add more itineraries in the future.

Apart from establishing direct connections with China, Ukraine also became a European gateway for westward traffic. The increase of Eurasian traffic has resulted in frequently congested border-crossings on the European entry points. Brest/Malazewicze shoulders most of the traffic volumes. Consequently, there is a need for alternatives to allow rail haulage to keep its services undisturbed and efficient.

In April 2020, PCC Intermodal and Global Ocean Link initiated a new link between Poland and Ukraine through the Mostyska II border-crossing. The service operates once per week and has an immense potential to handle transit cargo too since it has all the appropriate infrastructure and capacities.

Apart from major developments in Eurasian transport, Ukraine also advanced towards the European network. In November, HHLA announced the establishment of subsidiary company Ukrainian Intermodal Company (UIC). The new company’s objective is to connect the Black Sea port of Odesa with important economic centres in the country by rail. Subsequently, this initiative provides good connectivity between the country’s biggest port and other destinations and creates possibilities for further expansion in Europe.

Additionally, in mid-December, Ukraine’s Sea Ports Authority agreed with the Port of Gdansk to establish an intermodal corridor connecting the Baltic with the Black Sea. The purpose of the corridor will be to transport cargo between the ports of the two countries by rail.

Finally, in late December arrived another memorable agreement between the Ukrainian Railway Transport Service Center “Liski” and UkrFerry and FerryPlus. This agreement will enable sea connections between Turkey and Ukraine that will further continue to Poland by rail. Understandably, this move grants Poland and Ukraine direct access to the Middle Corridor and the New Silk Road via Turkey. Moreover, it proves that Ukraine’s expansion plans portray consistency and continuity, both characteristics that lead to success.