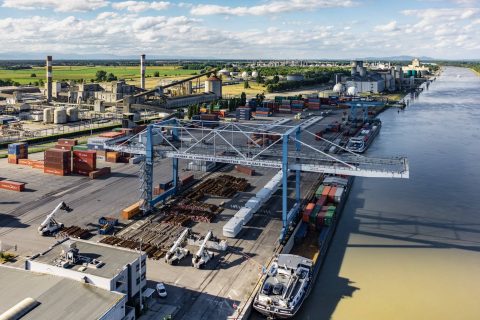 Swissterminal will take over operations of the three French inland ports Ottmarsheim, Huningue-Village-Neuf and Ile Napoléon. The company has won an international tender to operate the three Alsatian ports. The three ports will be merged in the company Alsaceteam, which forms a joint venture with the seaports Le Havre en Marseille-Fos. Operator of the terminals will be Alsaceterminal.

Alsace team in turn takes a 39 per cent stake in Euro Rhine Ports, the successor to the former public port company Ports de Mulhouse Rhin, which owns the concessions of the three ports. The other 61 per cent of the shares will remain in the hands of five semi-governmental organisations, including the city of Mulhouse, the French waterway operator Voies Navigables France and the Chambre de Commerce et d’Ind segment.

With this move, Swissterminal and its partners want to improve transport connections within Europe for the forwarding industry on the border triangle region. It plans to establish new rail connections with Le Havre and Marseille-Fos, which are the two main French seaports. In this way, it is broadening transport options for numerous industries in the region, such as chemicals, metals, food processing and construction.

Ottmarsheim, located on the Rhine river 15 km northeast of Mulhouse, is the largest of the three ports. The annual capacity is currently approximately 200,000 TEUs. This is a trimodal container terminal (rail/barge/truck) with a direct rail connection on its premise. With the new operator, the port will have direct rail connections to Le Havre and Marseille as well as links via Birsfelden (Switzerland) to Genoa (Italy) and China.

The current bulk-goods port in Huningue-Village-Neuf, also located on the Rhine river and about 35 km southeast of Mulhouse, will be developed into a trimodal transhipment centre (rail/barge/truck) for container traffic with Switzerland by 2025. The terminal directly borders Basel (Switzerland) and Weil am Rhein (Germany). The goal is to achieve an annual capacity of more than 100,00 TEU. Huningue-Village-Neuf will replace Swissterminal’s existing container handling facilities in Basel-Kleinhueningen.

The third port site in the Ile Napoléon industrial zone is just outside Mulhouse city limits on the Rhine-Rhône Canal. It will continue to serve for conventional cargo handling of bulk goods and fuels.