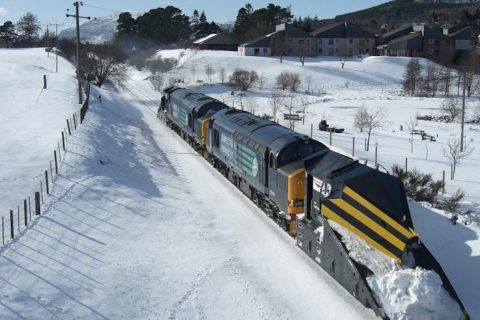 Britain is often mocked for its reaction to slight snow falls, but rail freight ploughs on through in some of the hardiest of winter conditions. The headlines last week, of the Merseyside metro network brought to a halt amid conditions that hardly merited even the local authority to deploy the road gritters, brought criticism to Network Rail. That though is in stark contrast to the harsh and often unpredictable conditions tackled by the infrastructure agency, up and down the UK.

As balmy as Barcelona (except this week) and as arctic as Alaska – often on the same day. If there is one thing that post-Brexit Britain will never lack, weather is that commodity. Mainland Europe may experience deeper cold, but every year Britain’s railways experience some sort of winter disruption. Be it frozen points, snowed-up Eurostars, or increasingly problematic flooding, the operators of passenger, freight and the infrastructure face a season-long trial by weather. Inevitably Network Rail has responsibility for clearing the tracks, and they depend heavily on partners from the rail freight sector.

Rail freight to the rescue

With passenger services almost exclusively consisting of multiple units, it falls to the rail freight sector’s combined fleet to provide the contract motive power. Typically, the worst winter weather hits the UK in January and February, and this week is expected to be the first serious weather of the 2020-21 season. Call will be going out from Network Rail HQ.

Although winter conditions are generally more difficult in the north of England and Scotland, Network Rail try to cover every eventuality. “Our seasonal track treatment vehicles and machines are ready at depots across Britain for deployment where needed”, says Network Rail in a winter statement. “We use three different types of snow ploughs. The snow and ice treatment trains (SITT) plough can be added to the front or rear of a SITT if significant snow fall has closed a third-rail route”, they say. The recent controversy around Liverpool and Merseyside, revolved around ice on the third rail system that supplies that electric network.

Mersey snow flurry, but deep drifts in the North of Scotland

While the snowfall was minimal around Liverpool, there is often much heavier snow on lines to the north. The West Coast Main Line is rarely brought to a halt by snow, but, further north, in the Scottish Highlands, daily treatment is required to keep the vital Perth – Inverness Highland Main Line open. “Heavier snow calls for the deployment of our more robust ploughs – the Beilhack V plough and Independent plough. The Beilhack is shorter in height than the Independent, giving the driver greater visibility over the plough”, say Network Rail.

The most likely locations for the deployment of the biggest ploughs are the Highland Main Line (vital for the intermodal flows upon which the North of Scotland depends for perishable goods) and the lines over the highest summits in England, notably the Carlisle and Settle line, which provides an alternative freight route to the busy West Coast Main Line. Two locomotives are required to handle the Independent plough, due to its size, say Network Rail. “This also gives flexibility and resilience. We store both Beilhack and Independent ploughs at strategic locations and help to clear heavy snow, but we don’t use them for avalanches, which could contain hidden rocks, ice and debris.”

With extreme weather events becoming more frequent, it is likely that Network Rail’s snow clearing operations could become more frequent, and the call to rail freight for motive power, may well be made more often. This week could be a foretaste of things to come and operators on speed-dial.