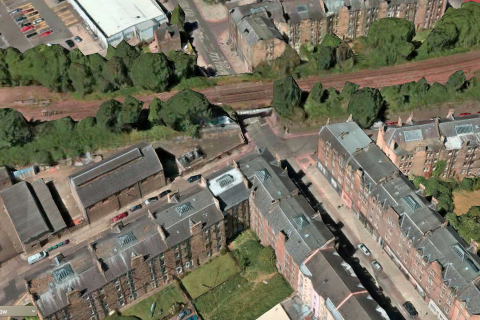 Network Rail, the UK infrastructure management agency, has begun a much anticipated refurbishment on a busy freight route through Edinburgh. At the same time, there are renewed calls for passenger services on the line. Upgrading the South Suburban Loop to cope with regular passenger services, as well as more than seventy strategically important daily freight movements, would be a significantly bigger project than the planned bridge works just begun yesterday (5 January).

It is not quite the Forth Bridge, but the crossing that carries the South Suburban line over Gorgie Road in the west of Edinburgh needs looking after just as much, to keep the busy freight route open. The line, which has not seen stopping passenger services since 1962, nevertheless remains busy, as a part of the strategic freight network.

Works will begin in the first week of January and continue for several months. The 1.35 million British pounds project (1.7 million euros) is a small but vital part of a wide-ranging structural modernisation programme for the railway in Scotland.

Not as famous as Forth Bridge

The Gorgie Road bridge, which carries the railway over that busy thoroughfare, is on the most westerly part of the Edinburgh Suburban and Southside Junction Railway, commonly known as the ‘South Sub’. It lies immediately south of a junction that avoids the congested Edinburgh Waverley station, and it historically helped serve a complex of industrial premises in the area. It carries tracks that also previously ran directly into a busy suburban station. The bridge has actually been in place for six years longer than the world famous Forth Bridge, having opened in 1884.

Today, although local movements are rare, the route carries economically important daily flows, including strategic intermodal traffic between the East Coast Main Line, Central Scotland, the North of Scotland, and the West Coast Main Line to England. The ‘South Sub’ is also earmarked for operational movements to and from a new passenger rolling stock maintenance depot on the east side of Edinburgh. The line is on a long-term schedule for overhead electrification as part of a rolling programme to wire up the entire Scottish network.

The operational importance of the South Sub is such that its continued existence has rarely been in doubt. Even though its stopping passenger services, and all intermediate freight operations, ceased almost sixty years ago, every major freight operator uses the line on a daily basis. A handful of passenger services also run around the loop, for driver familiarisation and to access Waverley station from the east.

Network Rail say their refurbishment project will involve cleaning, steelwork repairs and repainting, as well as noisy ‘rivet-busting’ and ‘grit-blasting’. Some de-vegetation work is also scheduled. “The work we’re doing at Gorgie Road will not only extend the lifespan of the bridge but will ensure we can continue to run a safe and reliable railway”, said Gerald Brown, scheme project manager at Network Rail.

There have been periodic calls for a stopping passenger service to be reinstated along the South Sub, which would serve a variety of communities, and provide connections that avoid the city centre. Lobby groups, principally the well-organised Capital Rail Action Group (CRAGS). However, they and other interested parties recognise the difficulty of finding paths into Edinburgh Waverley – the very reason the South Sub was built was to avoid this conflict.

“Since 2009 there has been work by Network Rail to increase the utility of the Sub for freight traffic by improving signalling and widening the loading gauge”, says Edinburgh politician Fred Mackintosh. “Increasing capacity on the Sub and more importantly electrify the line – if that happens – and it would be done to increase the use of the Sub for freight services – then there is a real opportunity for new passenger services in southern and south eastern Edinburgh.”

Meanwhile, the bridge refurbishment at Gorgie Road will at least ensure that the debate continues over a live railway.