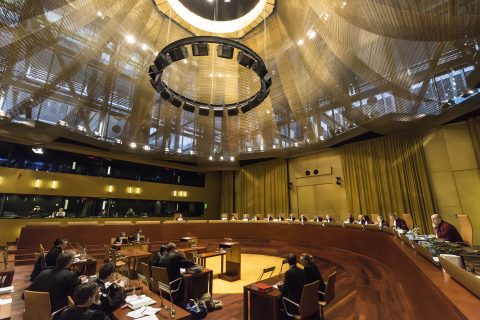 The Commission’s decision to fine Lithuanian Railways (LG) back in 2017 is correct. This is the verdict of the Court of Justice of the European Union. The fine was imposed to the rail operator with the accusation of abusing its dominant position in the Lithuanian rail freight market. The amount to be paid was reduced from almost 28 million euros to 20 million euros. Additionally, compensation claims from Latvian Railways and LDZ Cargo were rejected.

The General Court’s verdict came as a result of an action that the Lithuanian Railways took against the Commission’s ruling to fine them. The Court judged that the Commission had every right to move in this direction according to Article 102 of the Treaty on the Functioning of the EU (TFEU).

Since 1999 Lithuanian Railways were collaborating with freight operator Orlen-a subsidiary of PKN Orlen- for the transportation of oil from the company’s refinery to the Lithuanian port of Klaipeda.

In 2008 Orlen examined alternative sea transportation options because of disagreements concerning the service rates that LG was offering. The company decided on switching its sea business from the port of Klaipeda to the ports of Riga and Ventspils, in Latvia. With the transition to Latvian ports, Orlen decided to entrust the rail transportation of its products to Latvian Railways.

LG perceived this move as threatening since it would lose a profitable partnership. Consequently, and under the pretext of repairing damages, the Lithuanian operator dismantled a 19-kilometre long rail track that would facilitate traffic towards Latvia. Orlen and the Latvian railways reacted to this move because, in their view, it constituted a clear undermining of competition that aimed to strengthen LG’s monopoly.

On its behalf, the European Commission estimated that the Lithuanian Railways took advantage of their dominant role and imposed a fine of 28 million euros for breaching EU laws about competition. Moreover, Latvian Railways and its subsidiary LDZ Cargo claimed compensations of almost 82 million euros for losses that they suffered due to the dismantling of the rail lines.

Lithuanian Railways directly rejected the aforementioned claims stating that they are politically motivated. Furthermore, they took action against the decision to be fined for implementing unfair competition. The action, together with the compensation claims, was examined by the General Court, with the final verdict justifying the imposed fine to LG.

However, the Court rejected the compensation claims. According to the final decision, Lithuanian Railways indeed breached competition legislation, but they do not bear any responsibility for the financial losses of the Latvian companies. This is so because the Court estimated that “the longer routes to the Latvian seaports would not have been competitive in comparison to the route to Klaipeda”.