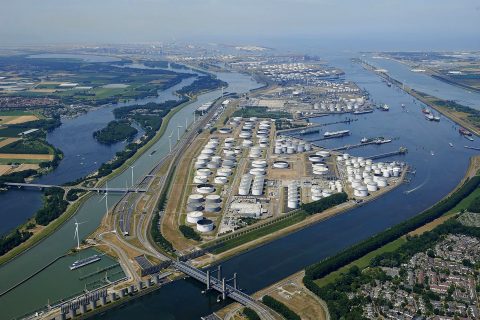 Kombiverkehr has added another terminal in the port of Rotterdam to its European intermodal network. Four times a week, trains of the Frankfurt-based operator will connect the Rotterdam Europoort P&O terminal with Duisburg Ruhrort Hafen DUSS, from where it links to many other European commercial centres.

The new service not only generates a new end-to-end product, but also covers shipments destined for or originating in Great Britain, Peter Dannewitz, Head of Sales at Kombiverkehr KG poins out. “Even if it comes to a possible hard Brexit, our new product can be the essential transport alternative for many hauliers if long queues build up on the road at entry and exit points into and out of the European Union. In Harwich, Killingholme, Teesport and Hull we offer our customers key port connections from Europoort to the east coast of Britain in collaboration with P&O Ferries and Stena Line”, he continues.

The new connection to Duisburg also paves the way for connections to and from Leipzig, Munich, Ludwigshafen or Hamburg in Germany, for instance. For international services, the Scandinavian countries as well as Poland, the Czech Republic, Austria, Hungary, France, Spain, various Balkan states, Greece and Turkey can be reached  by rail.

The new link will also have an impact on the existing Duisburg – Lovosice v.v. direct train. Kombiverkehr has now been able to increase the Duisburg – Lovosice v.v. train, previously reduced to one or two departures a week due to coronavirus, to a total of four return trips. The terminal in Lovosice offers the possibility of onward connections to Brno, Přerov and Ostrava in the Czech Republic and to Bratislava and Haniska in Slovakia. Partner company Bohemiakombi can organise the first and final leg to the Lovosice hub terminal or the delivery of shipments direct by truck to the recipient in the Czech Republic or Slovakia.

Kombiverkehr’s new product means it now offers a total of 16 train departures per week in each direction from Duisburg to Rotterdam (RSC and Europoort) and Moerdijk, each with a short-sea connection, and to Antwerpen Combinant. The onward ferry services operated by the shipping companies A2B, Stena Line and P&O Ferries open up direct crossings to and from Harwich, Killingholme, Teesport, Hull, London Thamesport, Blyth and Immingham.