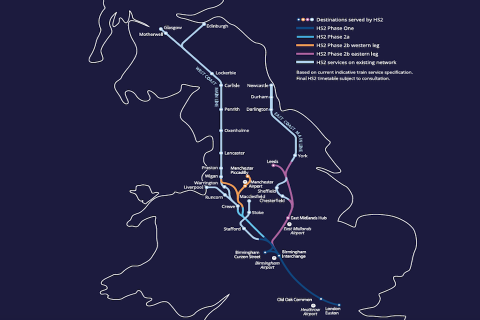 Logistics UK, the representative body for businesses in the entire supply chain, has said to the UK government that its continued support for the HS2 project, the new rail link between London and Birmingham, is dependent on a commitment from Westminster to grow rail freight as a vital part of the UK economy.

The warning comes as Logistics UK issues a new report, “High Speed 2: The case for released freight capacity”, and calls on the government to recognise the importance of rail freight. The body, formerly known as the Freight Transport Association, says the rail freight sector has been crucial to the country during the pandemic, and says it is vital to the UK economy and the government targets for decarbonisation.

The multi-billion pound HS2 project, constructing over 100 miles (160 kilometres) of super-fast railway between London and Birmingham, has been at pains to express its credentials as a game-changer for the network as a whole, delivering new capacity for both passenger and freight services. However, Logistics UK says that it will take government backing to make sure that new capacity, much of it on the West Coast Main Line, the busiest mixed-use railway in Europe, is allocated to new freight services.

Rail freight has played an important role in supporting the UK economy and society throughout the pandemic, starts the report. “We must create the right environment for rail freight to thrive”, says the opening statement. “High Speed 2 will present opportunities for freight on the existing rail network. Logistics UK is seeking assurances from government and other stakeholders that there will be released capacity for rail freight as a result.”

Logistics UK have laid down on the line their conditions for continued support of HS2. They say it is conditional on the London government pledging unequivocal support to grow rail freight. Zoe McLernon, multimodal policy manager at Logistics UK, says it needs government to secure the future of rail freight in the UK, and provide a cast-iron guarantee that freight services will have sufficient access to the released capacity that HS2 will provide. “The conventional rail network is bursting at the seams”, she says. “There are almost half as many freight trains using the network as there were 15 years ago as passenger services, which continue to grow steadily, take the lion’s share of the network.”

Enhance the role of freight

The HS2 project, which is divided into several phases, and is expected by most commentators to cost in excess of 100 billion British pounds (110 billion euros), is under construction and is expected to connect the Midlands and London by 2030. The Logistics UK report focuses on how Phases One and 2a of HS2 will release capacity on the West Coast Main Line and proposes ways to enhance the role of freight across the project. However, Logistics UK claim that there is no policy nor legal requirement that a proportion of released capacity must be allocated to freight.

“HS2 presents a once-in-a-generation opportunity to make Britain’s transport network more sustainable, and the opportunity for freight via released capacity from HS2 is substantial”, argues McLernon. “HS2’s development will free-up space on the existing rail network for up to 144 extra freight trains per day, potentially removing 10,944 HGVs from the UK’s congested roads every day. Logistics UK urges government to reconsider its principles and provide clear and unequivocal support to grow rail freight.”

Logistics UK is open to the need for an integrated goods handling network across the UK. They have this week given a qualified welcome to trials of 48-tonne heavier goods vehicles on the UK roads, similar to the largest vehicles currently operating in Continental Europe, though not quite as heavy as the 50-tonne maximum permitted in The Netherlands and Norway.

The heavier trucks, say Logistics UK, would be more compatible with rail freight intermodal containers which, ironically, would require more paths on the freight network to be fully exploited. Perhaps for joined up thinking, Logistics UK is demonstrating that they practice what they report.