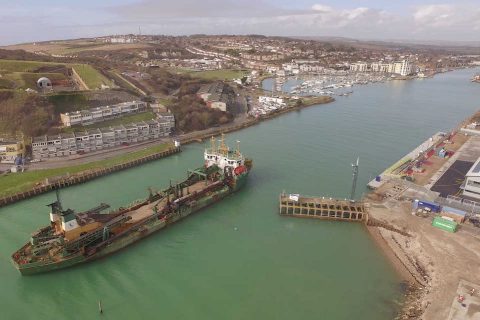 DB Cargo UK has signed a new ten-year contract with Brett Aggregates, the largest independent producer of sand and gravel in the UK. The contract will see the rail freight operator transport millions of tonnes of sea-dredged products every year from Brett Aggregates’ revamped marine terminal at Newhaven Port, and from their other bases in England. The products will be transported primarily for use in the construction sector.

The new deal will see marine aggregates moved by rail to serve building and infrastructure projects around the London area. Brett Aggregates recently invested in the Newhaven freight terminal, a former intermodal and ferry port, which was the subject of summer bulk-train trials. The contract also includes trains from established bases at Cliffe on the River Medway in Kent, and from Ipswich in Suffolk in the East of England. The new flows have been called further evidence of the modal shift towards rail for more than just intermodal commodities. Newhaven has been preparing for bulk traffic for several months, and will now see its first regular freight flows since last century.

Roger Neary, who is head of sales for DB Cargo UK, cited the new contract as fulfilment of the test trains operated in the summer. He said success was down to good relations, and was founded on strong teamwork and collaboration. “A great example of this”, he said, “was DB Cargo UK’s recent work with Brett and Network Rail, which saw the first freight train in almost 25 years transport product out of Newhaven Port.”

Back in the summer, Tom Longland, the managing director of Brett Aggregates was on hand for that first train to operate from Newhaven in a quarter of a century. “This is very good news for customers”, he said. “Not only locally but we have also reinstated and significantly expanded the rail connection, enabling aggregates to be exported by rail to meet construction demand in London.” That first fully loaded train of aggregates left the site on Thursday 18 June, heading for London and the Wembley batching plant belonging to Capital Concrete, a Brett Group subsidiary.

From first train to new contract

Tom Longland was on hand again for the contract inauguration. “This new agreement with DB Cargo enables joint plans for further growth in rail freight from Brett marine aggregate terminals and the development of further urban rail terminals in London”, he said. “It builds on the significant investment made by Brett in its new marine terminal at Newhaven, capacity enhancements at existing terminals at Cliffe and Ipswich, and concrete plant at Wembley which will supply the London and South East construction market by rail,” he added.

DB Cargo UK’s extensive commitment to the UK rail freight industry was further emphasises this week, when Deb Hardy joined from the logistics industry as its new chief financial officer. The role had been vacant since September 2020 when Andrea Rossi was promoted to chief executive following the retirement of Hans-Georg Werner.

Newhaven has also been promoted from dormant, to fill a rather longer vacancy. In addition to their established bases in Ipswich and Cliffe, Brett Aggregates new marine aggregates terminal at the revived Newhaven Port will see the bulk of the action in the revived aggregates operation. The port has licensed access to over 50 million tonnes of consented marine aggregates.

The site is now receiving material from a range of vessels such as Brett Britannia Beaver (main picture). The agreement with DB Cargo UK will see much of that cargo dispatched by rail. “Rail freight is the most economic and environmentally-friendly means of transporting large volumes of aggregates”, added DB’s Neary, noting the often quoted statistics of each train taking the equivalent of 76 trucks off the UK’s already congested road network. “We’re proud of our partnership with Brett and look forward to delivering safe and reliable rail services for them for years to come,” he said.

Newhaven Port was recently in the news for the final legal closure of its disused ‘ghost station’. It was the official closing of passenger facilities that made the environment legally safe for freight operations to resume.