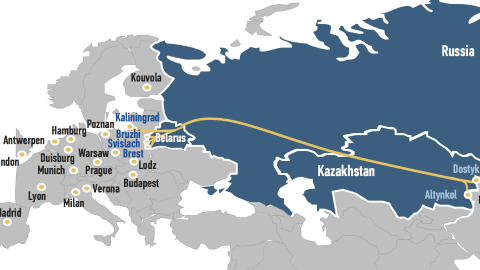 EU-China traffic via Belarus increased up to 1,6 times for January-September

More than half of the cargo volumes of Belarussian Railway was on transit between Europe and China this year. The railway company of the country transported more than 700,000 TEUs of cargo in the first nine months of this year. Out of these, more than 380,000 TEUs were operated in the China-Europe-China route. Subsequently, the volume of traffic saw an overall increase of thirty per cent, while the volume in the EU-China connection grew up to 1,6 times, compared to the same period last year.

“Our main priorities remain to ensure timely train operation, and create new projects and services for the accelerated delivery of goods”, stated the railway operator, which has recently provided access to a train with 123 containers of consumer goods from China to Europe. Additionally, it referred primarily to the Brest-Severny station at the border crossing Brest/Terespol: “The container terminal at Brest-Severny provides services to the business community, for storage, consolidation of containers, and timely terminal processing”, while underlying that “Belarussian Railway provides unimpeded access of long-distance trains”.

Almost a year ago, in September 2019, Belarussian Railway completed the upgrade and modernisation of the Brest-Severny intermodal terminal. The project, with an investment exceeding the amount of nine million euros, was estimated to improve container handling on the east-west corridor, including the rail freight connections on the New Silk Road. The upgrades concerned the terminal’s tracks, the increase of handling and storage capacities, the installation of four modern gantry cranes, and the purchase of two reach stackers with a loading capacity of 45 tones.

Taking also into consideration the operator’s report that concerned the period between January-August 2020 ( freight traffic to China increasing by 23 per cent), it is apparent that the specific investment can be evaluated as entirely successful. Moreover, due to the continuous growth of container traffic, Belarussian Railway is examining the development of new routes. For instance, in October 2020, it provided an extra access point for container trains to the Belarussian-Polish border crossings Bruzgi/Kuznica Bialostocka, as part of the east-west corridor.

Do you want to hear all about the developments on the New Silk Road in 2020? On 10 and 11 November, the online edition of the European Silk Road Summit 2020 takes place. The impact of the pandemic, the current volumes and the forecasts for the year to come are other topics on the programme. Have a look here and register now.