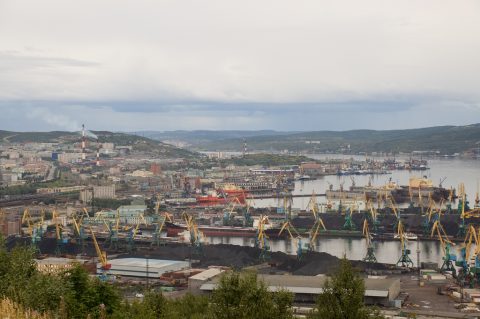 A new railway bridge across Russia’s Kola River near Murmansk has been put into operation. The previous bridge collapsed during a flood of the river on 30 May 2020. It lies on an important railway line in the northwest of the country, en route to the port of Murmansk. The first train to pass the newly built structure was a freight train.

Trains started running on the new bridge on Monday 28 September, 105 days after the collapse. Initially, the construction of an entirely newly built bridge was expected to take half a year. “It is an achievement that will definitely go down in history, and we have something to be proud of”, said CEO and Chairman of the Board of Russian Railways Oleg Belozerov, who attended the opening ceremony, among other officials.

The railway bridge crosses the Kola River at the 1436-km marker of the Kola-Vyhodnoy stretch in Murmansk region. “The railroad is not only a lifeline for the city, but it also ensures the stable operation of our largest enterprises and plants”, explained Andrey Chibis, governor of Murmansk region Andrey Chibis. One such plants is the Siberian Coal Energy Company, Russia’s largest coal company.

Althoug traffic on the railway bridge was suspended, it was redirected shortly after the collapse. The first freight train traveled the bypass section on June 19. Freight trains carrying necessary goods and export cargo to the port traveled along the railway line, as did several passenger trains departing directly from the Murmansk station. Some of the passenger trains continued departing from Vykhodnoy station, where all the necessary conditions for serving passengers were created, and a regular bus transfer was organized to and from Murmansk.

Unlike the old one, it does not have supports directly in the river bed: they are all on the coast. This eliminates the influence of flood waters on the bridge. In addition, it has a positive effect on the environment: now the riverbed is unobstructed and the supports no longer interfere with fish migration.

The bridge consists of three superstructures: one central one (111.2 metre in length) and two smaller ones (18.2 metre). The superstructures stand on four reinforced concrete coastal supports on the foundations of 34 bored piles. The total length of the bridge is 158.2 metre.

The bridge will feature an innovative monitoring system to warn about possible malfunctions in the structure in real time and forcibly stop traffic at the approaches to the bridge if the sensors detect any security threat. The signal will go to the railway dispatch center and automatically turn on an alarm, stopping trains from crossing the bridge. This is the first system of its kind to be installed on a railway bridge in Russia.