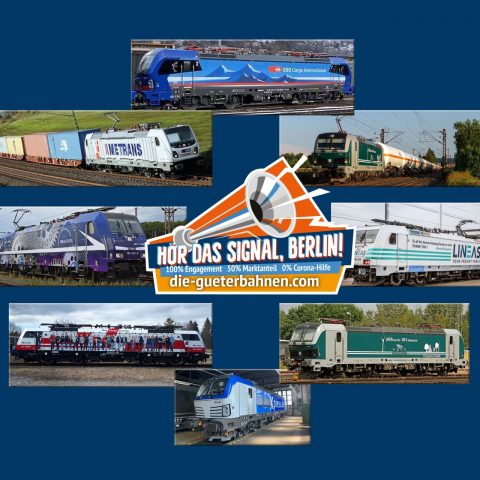 Rail freight industry players held the first ever demonstration on rails in Berlin yesterday, 28 September. They demonstrated against the state aid of the German government for Deutsche Bahn. Organised by the Network of European Railways, a 400 metre-long train was formed, entirely by electric locomotives of its members, from all over Europe.

‘Hor das signal’, or ‘hear the signal’ was the slogan of the campaign. The signal could indeed be heard even if not attending the demonstration, as twenty railway undertakings hunked their horns simultaneously as they took off from the station. It was something not seen before. But they were not just there to impress, the message was a serious one: ‘100% engagement, 50% market share, 0% of the German state aid!’

The federal government of Germany intends to make five billion euros available this year to compensate for the losses at Deutsche Bahn (DB). The German state-owned railway company expects to lose between 11 and 13.5 billion euros in revenues over the next four years due to the corona crisis. Their rail freight division alone shows a deficit of 352 million euros in the first six months of the year.

However, according to NEE the losses of DB do not result solely from the corona crisis, as the company has suffered structural losses. In the meantime, the rest of the sector is not supported for their losses suffered during the corona crisis. “The federal government provides 0 euros for losses by rail freight companies other than DB”, it states.

This argument was echoed by the railway undertakings in the demonstration. “We welcome Germany’s commitment to rail freight, but the government needs to support the entire sector and not just one company, whose rail freight activity has been loss making since years. The successful privatisation of Lineas shows that there is a better way”, wrote Lars Redeligx from Lineas.

Moreover, this form of state support distorts competition, which is vital for a well-functioning market, the industry players seem to agree. “Competition is crucial in order to survive the competition with the road, and in order to draw more volumes to the railways. Competition is good for efficiency, customer and market orientation and innovation”, says Hans-Willem Vroon, Director of interest group RailGood.

“Since years competition has improved European rail freight networks. The current behaviour of politicians in Germany forces us back to the time before the rail market was opened”, says Sven Flore, CEO of SBB Cargo International. “In the short term, tax money will be offered. But on the long run, quality will disappear without competition.”

Although the industry players agree on the wrongdoing of the state aid, they do require another form of support from the government. They feel ignored during the corona crisis, when rail freight proved to be fundamental in keeping the goods flowing.

NEE stated: “On the one hand, railway companies do not want to be treated worse than the federally owned rail freight operator DB. On the other hand, they want the government to follow up its long-standing and varied announcements to strengthen the railways with actions now, to shift traffic off the road. Rail freight should therefore be heard.”