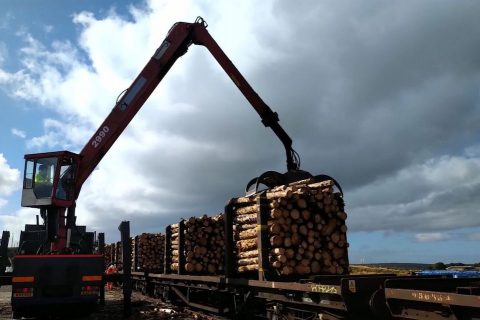 The success of timber train trials in the north of Scotland has raised hopes for more new freight services across the UK. Industry and lobby groups are increasingly aware that freight must play a bigger part in the business case for the rail network. Official sources are now more willing to include freight in early planning, including an urban branch line in Scotland.

Six weeks on, and the flow of timber from the Far North of Scotland has come to a successful conclusion. For the first time in over a decade, rail freight made possible the bulk movement of timber for Scottish business. Government agencies, business interests and the rail freight sector are all now looking to repeat the success.

Learnt a lot and excellent coverage

Victa Railfreight, the Kent-based company that provided the logistics co-ordination for the timber trains, has been very satisfied. Neil Sime, their managing director, has high hopes that the success will result in more work in the near future. “We’ve run fifteen trains, learnt a lot and got some excellent coverage”, he said. “The collaboration between all involved from the railway industry has been fantastic. Our customer, Munro Harvesting has been hugely supportive. Those providing terminal and handling services have worked hard with us. The support from Transport Scotland and HITRANS, the regional transport partnership, has made it happen. A huge thanks to them all.”

The trial has been met with applause from all concerned, including from the popular press. The operations were even covered by television crews, and made regional news bulletins.

Freight operations could play a significant role in the viability of remote parts of the UK rail network. On routes like the lines north of Inverness, passenger traffic is thin and undermined by road alternatives. However, bulk freight is much better suited to rail, and meets environmental concerns head on.

Roland Stiven of the Confederation of Forest Industries and the project manager for their Timber Transport Forum, welcomed the movements from Georgemas Junction. “The Forum has always been keen”, he said. “There are very fragile roads serving many plantations up there. What happened in the past was it didn’t work for commercial reasons. I’m hoping that nowadays, with working practices that have moved on, we can make that a viable way of moving timber. The trial will hopefully give some idea of how practical and commercially viable it will be.”

The trials have already proved that many freight logistics challenges can be met with modern working methods. That has given new enthusiasm for other rail development projects around the UK. In their latest statement regarding a project to reinstate passenger services to Leven in Central Scotland, Network Rail specifically notes the potential for freight traffic in the area. Unlike the Far North Lines, the short Leven branch connects an urban settlement, with industrial installations at lineside, including a distillery that formerly had its own rail connection.

Freight potential will also likely be a factor in lines under consideration for reinstatement under a UK scheme designed to partially reverse a closure programme undertaken in the 1960s. Some freight-only lines, such as a connection to the coastal town of Blyth near Newcastle in the North East of England, may have passenger services added, further securing investment in the rail infrastructure. Presently the line conveys bulk alumina trains from Blyth to Fort William in the rural north of Scotland, where timber traffic was once a common sight.

Neil Sime of Victa Railfreight may have his sights set on that potential traffic. After the success of the timber trails he does intend to return to the north of Scotland soon. “We will now go away and assimilate all of the information, which will be summarised in a report, and look to see what can be done in the future. I very much hope we’ll be running more trains in the not too distant future.”

So what happens at the end of a sucessful trial of six weeks? It goes back to being transported by road! How utterly pointless!