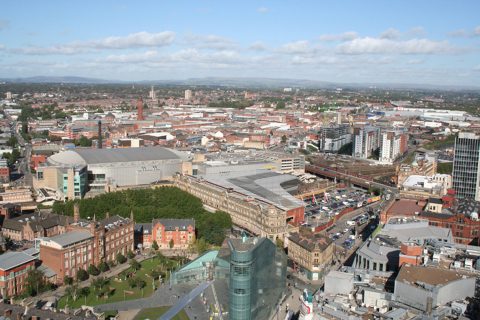 Work on the Transpennine main line between Leeds, Huddersfield and Manchester, has been strengthened by a funding package announced by the UK Transport Secretary Grant Shapps. 589 million British pounds (646 million Euros) has been confirmed for works, including electrification and some quadrupling of lines. A new body will also oversee connectivity projects in the North of England.

The government announcement comes after years of lobby for significant upgrades to the transport network in the North. The most congested section of the route will be doubled from two to four tracks, improving journey times and reliability. Full electrification, digital signalling, more multi-tracking and improved freight capacity are now under consideration, says a government statement, ahead of an ‘Integrated Rail Plan’ due to report in December.

The Departement for Transport also said work is underway to tackle the bottlenecks at either end of the route, without which the potential of the upgrades cannot be fulfilled. For freight, this would primarily mean a solution to the chronic congestion of the Castlefield Corridor in Manchester – a short urban section of twin track in the city centre, which is regarded as the primary pinch point in the entire region.

However, the Rail Freight Group, representing the industry in the UK, gave a cautious welcome. They said that with funding now committed to the project, an Integrated Rail Plan will consider how freight capacity can be provided as part of the core scheme.

With the plan not due till December, Rail Freight Group is urging the UK Government to ensure that freight enhancements to deliver capacity and gauge clearance are accelerated, so that they can be delivered as part of the already committed scheme. Most of these enhancements have already been studied and scoped in concept, says RFG.

Ports and businesses across the North of England have been working with RFG to make the case for improved rail freight links on the Transpennine routes. They say new rail freight services will support post-pandemic recovery, and help develop new trade routes post Brexit, delivering economic growth in the region. They also say rail freight will help deliver the green recovery, reducing carbon and air quality emissions.

Mike Hogg, RFG Northern Representative, was pleased to see Government has listened to businesses who have clearly set out their aspirations to use more rail freight as part of their distribution networks. “This project is vital in ensuring that those companies can deliver for the economy of the North, whilst also decarbonising their transport links”, he said.

Mayor of Manchester calls it a gear change

“This feels like a gear change from the government in the delivery of transport improvements in the North of England”, said Andy Burnham, the Mayor of Greater Manchester, who is a keen lobbyist for improved transport infrastructure across the region. “I welcome the new drive that the Transport Secretary is bringing to this.”

There is also to be a new body added to the administrative roles within the region. The Northern Transport Acceleration Council will hold its first meeting in September and will be made up of mayors and council leaders with the Transport Secretary as chair. A government statement says it will work closely with the Northern Powerhouse Growth Body. The statement does not make clear its relationship with the established statutory sub-national transport body, Transport for the North. However, the involvement of the Transport Minister as chair of the Council clearly steps up the agenda from Manchester to Westminster.