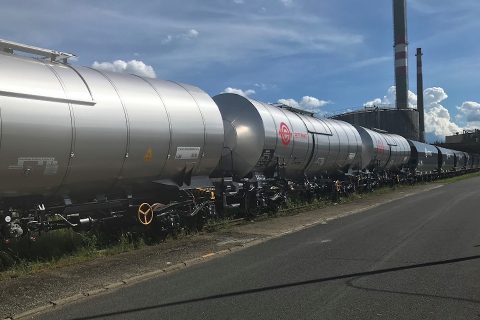 Emmanuel Macron, has said he wants to massively redevelop the Republic’s railways, with an emphasis on increasing the share of freight carried. The President signalled a radical change in freight transportation, as part of a huge programme of reforms announced in a Bastille Day interview given to French television. The 14 July interview also promised a revamp for regional services and overnight trains, and an examination of “small lines”, potentially meaning reactivation of some of France’s mothballed infrastructure.

With only a small percentage of the total market, French rail freight has only played a minor role in the nation’s industry. Currently, the network only accounts for around ten percent of tonnage moved, which puts France among the lower performers in Europe.

In his Bastille Day interview for Europe1 TV, President Macron promised to change all that. He announced the regeneration of freight as part of a massive programme of economic recovery and development.

The final plan will be published as a series of measures in September, including almost 150 specific points, delivered by the Citizen Climate Convention, a  committee of 150 French citizens, picked by lottery, who have been working on the plan at the president’s request for the past nine months.

“This follows on very closely after the announcement the 4F commercial initiative”,  said Peter Reinshagen, the managing director of freight rolling stock leasing company Ermewa, who was referring to Fret Ferroviaire Français du Futur, the consortium planning to double the amount of freight moved by rail, by the end of the decade.

It would appear the president’s ambitions now go even further, and that is good news for Reinshagen. “The 4F initiative was presented to ministers a few weeks ago, and puts everyone together on the same track. The president has taken the opportunity of Bastille Day to bring it to a wider audience”, he said.

Some steps have been taken to modernise the network. The much publicised renewal of regional passenger rolling stock being the most prominent. However, freight modernisation would require a significant fleet refit too.

“We hope very much to expand operations”, said Reinshagen. “France is our biggest market, and it is a big country with an industrial economy. From the current position, with a low level of rail freight, there is room for expansion of the domestic market. However, Ermewa – with a fleet of 42,000 railcars – is a European company, we welcome rail freight growth initiatives all over Europe.”

Other states, and the European Union, are awakening to the economic and environmental advantages of rail freight. As a means of economic recovery and regeneration, the coming decade could see a significant upturn in activity. That spells good news for companies like Ermewa, and President Macron could hardly have chosen better than Bastille Day to launch a French renaissance in rail freight.