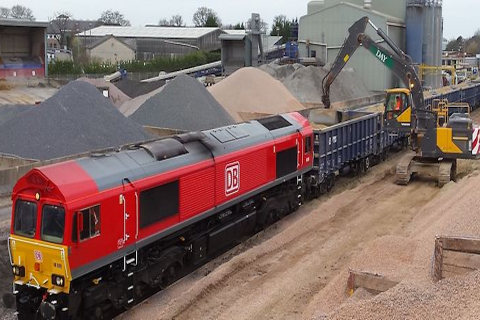 Independent aggregates supplier Breedon has turned once again to rail to fulfill a prestigious London HS2 contract, and there is a Welsh steel connection too. With 900 million tonnes of heavy raw materials in its reserves, the Great Britain and Ireland based supplier has plenty of future business for bulk rail operators. In this instance, they have teamed up again with DB Cargo (UK) to move loads of two unspecified products from their Dowlow Quarry near Buxton.

The destination is the recently commissioned aggregates terminal at Cricklewood in the north of London. While Dowlow Quarry is a prime source of white limestone, which is widely used in construction and agriculture, this flow is a little different. The site also has extensive manufacturing capabilities, producing asphalt and recycled products, all moved by the busy rail connection.

DB Cargo UK gave technical details of the flow, utilising a rake of 20 MMA open box wagons. At a loaded capacity of around 75 tonnes, that puts 1500 tonnes on each train. That takes the equivalent of 35 HGVs off the roads of the Peak District National Park and the UK motorway network.

The materials will be used in the construction projects around HS2, with both the Euston terminal and the massive Old Oak Common station being among the biggest civil engineering works currently underway in London.

The news comes quick on the heels of a number of announcements from DB Cargo UK in the bulk handling sector. Having recently been heavily involved in the reactivation of the south coast port of Newhaven as an aggregates terminal, the UK arm of DB Cargo has also put pen to paper on a contract with Roy Hatfield Energy.

The two companies are already commercial partners, and this new service will be operated on behalf of Roy Hatfield Energy, between the coal mining facility of Celtic Energy at Gwaun Cae Gurwen in South Wales, and Hope Cement Works in Derbyshire. The contract requires DB Cargo to deliver coal to the plant – which is vital for cement production. The first service consisted of 18 HTA wagons carrying 1350 tonnes. That is the equivalent of 31 of the heaviest road vehicles permitted on British roads.

Hope Cement Works is owned by Breedon, the same corporation for whom DB Cargo are hauling from Dowlow Quarry, just 15 miles away (24 km). If only there were a flow from London to South Wales, then DB Cargo could contemplate consolidating these operations. Well, there is, but it doesn’t quite lend itself to aggregates and minerals conveyancing.

RailFreight.com reported in May on the inauguration of cross-channel steel trains between Tata plants in Port Talbot, Wales and finishing plants in Belgium. Although the route goes via London, that that doesn’t quite fit for a convenient operational triangle, obviously. There is still plenty to celebrate however.

More than 50,000 tonnes of steel a week is now being transported by rail to docks in South Wales, as part of the partnership between DB Cargo and Tata Steel in the UK.

Derbyshire to London to Wales and back to Derbyshire

Working together, Tata and DB Cargo say they have increased the number of coil and slab train services to Newport and the adjacent Birdport Docks to more than 30 trains a week. Each steel train consists of up to 24 wagons and, given the specialist nature of the cargo, that’s probably not something easily translated into a road equivalent.

Some of that South Wales steel could end up in HS2 projects and, eventually, HS2 itself will reach as far as Manchester, Derbyshire, and within striking distance of Dowlow Quarry. Maybe this is a cyclical working after all. It might just take about twenty years for the round trip.